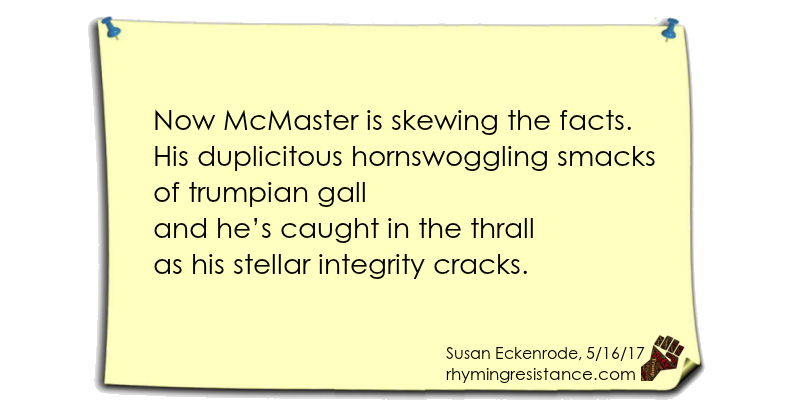 In one fell swoop, Trump revealed his abject unfitness and exposed McMaster, Secretary of State Rex Tillerson and deputy national security adviser Dina Powell — all who personally attempted to knock down the story — as dishonest hacks.

It is not unreasonable to ask whether McMaster, a lieutenant general who was previously seen as one of the few credible voices in the administration, can now serve the country and protect it from an unfit president only by resigning.

McMaster and Tillerson are complicit in Trump’s dishonesty, so must they resign?
Jennifer Rubin, Opinion, The Washington Post

Now McMaster is skewing the facts.
His duplicitous hornswoggling smacks
of trumpian gall
and he’s caught in the thrall
as his stellar integrity cracks. 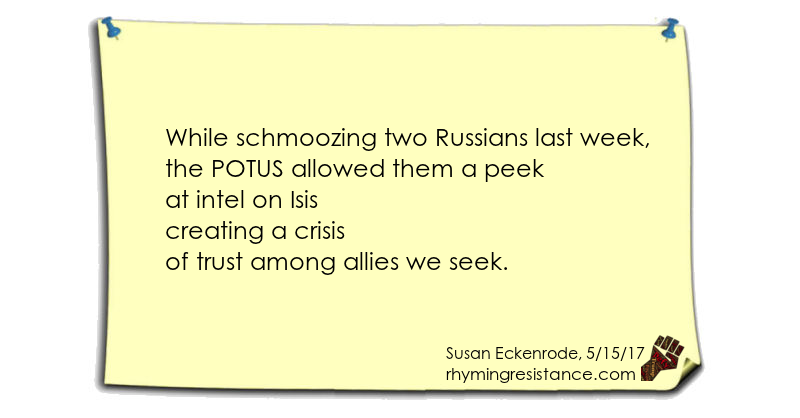 Last Wednesday, security experts nearly had a conniption when they realized that President Trump had welcomed Russian state media into the Oval Office. It turns out that was the least of the security breaches that day.

Trump’s disclosure of the sensitive details, withheld even from American allies, to Russia, an uneasy rival in the Middle East, is yet another jawdropping misstep by a president whose administration thus far is best viewed as a series of errors and gaffes.

While schmoozing two Russians last week,
the POTUS allowed them a peek
at intel on Isis
creating a crisis
of trust among allies we seek. 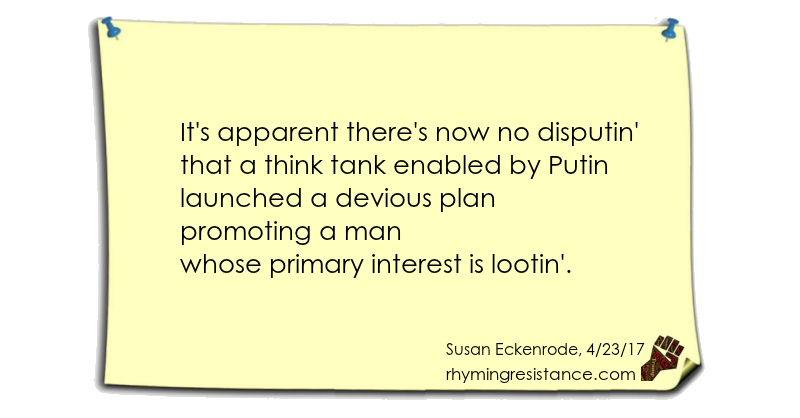 “A Russian government-controlled think tank had outlined plans on how to swing the 2016 U.S. election toward Donald Trump, according to a Reuters report Thursday. New documents reveal a strategy of using social media to bolster Mr. Trump and undermine faith in America’s electoral system. ”

It’s apparent there’s now no disputin’
that a think tank enabled by Putin
launched a devious plan
promoting a man
whose primary interest is lootin’. 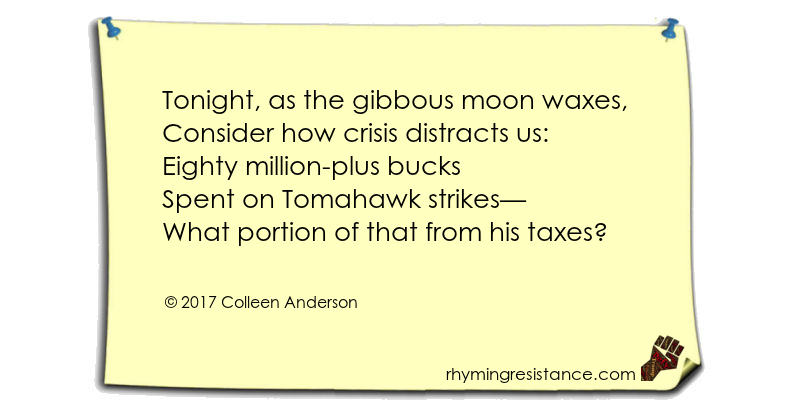 “The notion that military action salvages a president on the defensive, boldly underscoring his role as commander in chief, is nothing new. But there’s a fresh wrinkle in this case, because those bombs put Trump at particular odds with Russia at a moment when there’s enormous advantage in that.”

Tonight, as the gibbous moon waxes,
Consider how crisis distracts us:
Eighty million-plus bucks
Spent on Tomahawk strikes—
What portion of that from his taxes? 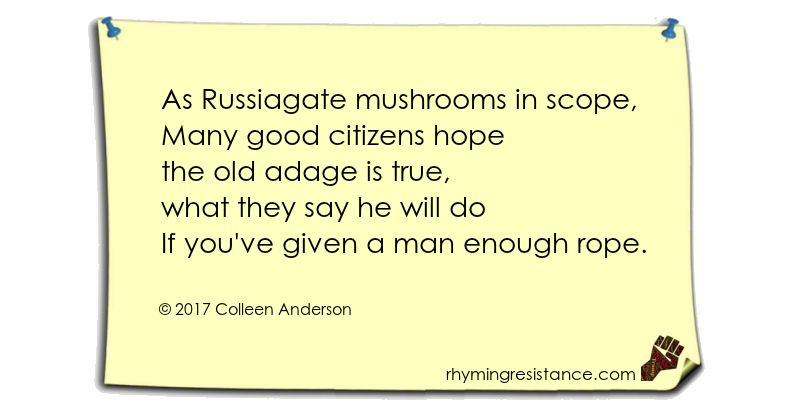 “Throughout the confusion of Donald Trump’s campaign and the chaotic events of his early days in the White House, one controversy has clung to the Trump train like glue: Russia.”

As Russiagate mushrooms in scope,
Many good citizens hope
the old adage is true,
what they say he will do
If you’ve given a man enough rope. 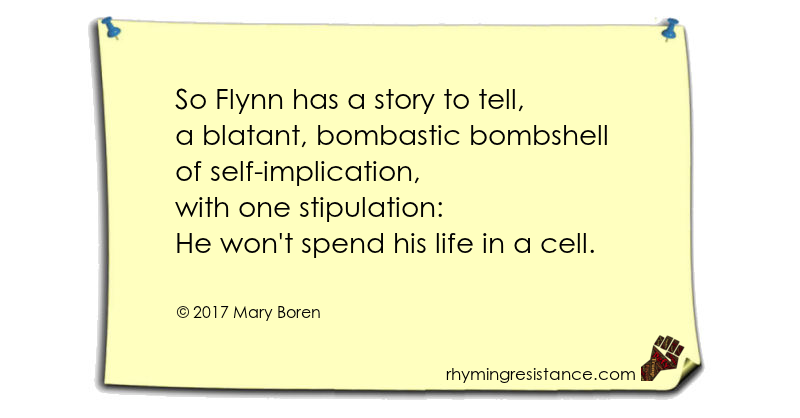 “When you are given immunity, that means you probably committed a crime.” -Michael Flynn, in a 2016 Meet the Press Interview

The congressional official said investigators were unwilling to broker a deal with Mr. Flynn — who resigned last month for misleading White House officials about his contacts with Russia’s ambassador to the United States — until they are further along in their inquiries and they better understand what information Mr. Flynn might offer as part of a deal.

So Flynn has a story to tell,
a blatant, bombastic bombshell
of self-implication,
with one stipulation:
He won’t spend his life in a cell. 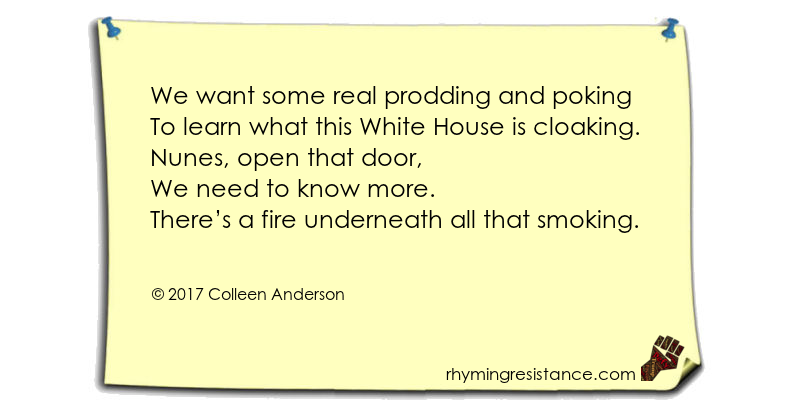 “Frankly, if Republicans in Congress want to demonstrate independence from a failing president and avoid constant questions about the issue they’d be smart to offload the entire matter to an independent commission or select committee. Nunes has made his own position — and Republicans’ support for him — increasingly difficult to maintain.” 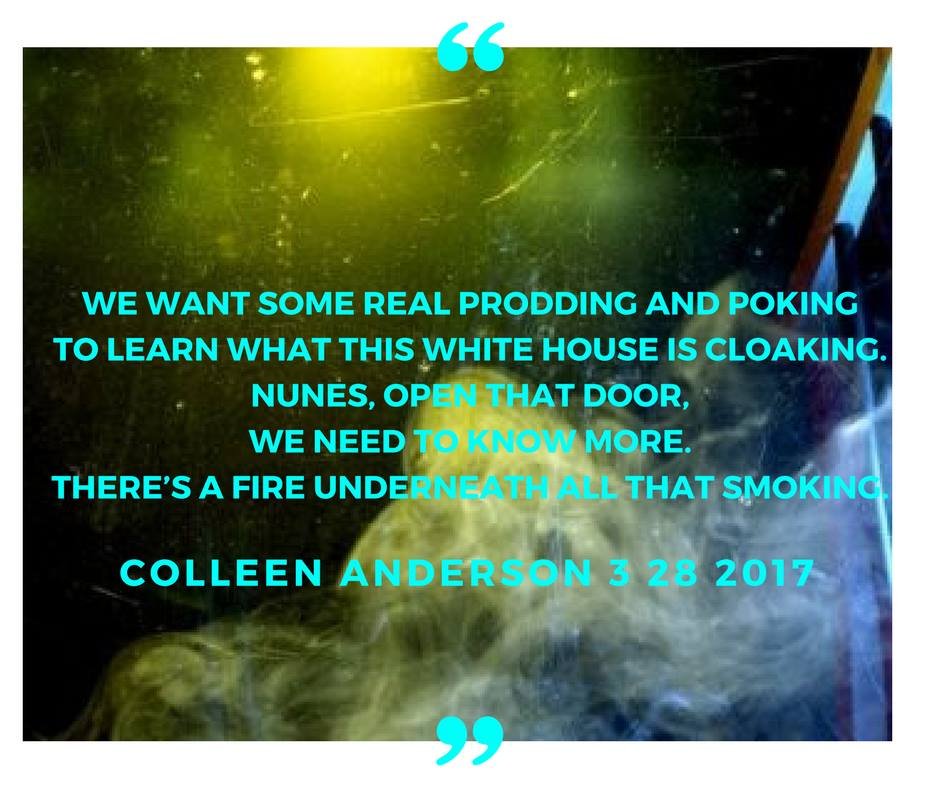 We want some real prodding and poking
To learn what this White House is cloaking.
Nunes, open that door,
We need to know more.
There’s a fire underneath all that smoking.

“Trump has consistently denied business or political ties with Russia but has also been conspicuously reluctant to criticise Putin and raised the prospect of reviewing sanctions against the country. Opponents argue there is circumstantial evidence that Trump colluded with Moscow to help his campaign but definitive proof has remained elusive.”

Will Russia connection become the Trump administration’s Watergate?
The Guardian

Is their ending about to begin
with a hugely cacophonous din?
When it’s all said and done
will they just cut and run
or will truth trump their lies for a win?

The new Wikileaks release of sensitive CIA documents about its cyber capabilities is many things, but perhaps most importantly it is a reminder that the campaign Russia is waging against the West and the United States is an ongoing effort, not something that happened in the past.

Why the Return of WikiLeaks Is a Problem for Trump
U.S. News & World Report

While the Russian connection still looms
and the smoke is arising in plumes,
here comes a new load
of news to implode
as the Wikileaks leaking resumes.

Democratic Congressman Eric Swalwell has launched a website to document the personal, social and business connections between the Russian government and members of the Trump administration — and the threats of such links to U.S. interests.

In an interview Thursday, the East Bay congressman called it a “living, breathing guide to what is happening” and noted that the site is evolving along with the story.

Swalwell, ranking member of the CIA Subcommittee of the House Permanent Select Committee on Intelligence, also is calling for an independent, bipartisan commission to probe the extent and nature of ties between the Trump administration and Russia.

Well, Putin is licking his chops,
delighted with all the fine props
trump’s throwing his way…
a full on display
of ignorant, mendacious sops.

Yes, ole Putin is locked on his mark,
and for him our fiasco’s a lark.
He’ll call it a win
by creating a din
that could snuff out democracy’s spark.