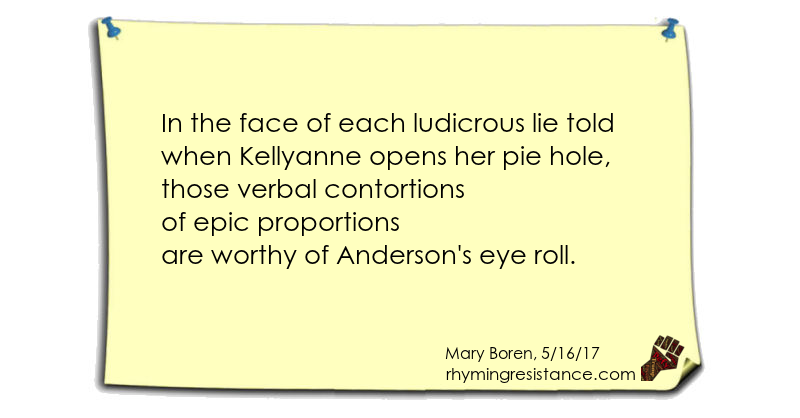 Now, obviously, Conway’s regular use of “alternative facts” is nothing new, but Mika and Joe went even further, alleging that she secretly hates Trump and made it known to them after appearances on their show during the campaign.

“This is a woman, by the way, who came on our show during the campaign and would shill for Trump in extensive fashion and then she would get off the air, the camera would be turned off, the microphone would be taken off and she would say ‘bleeech I need to take a shower’ because she disliked her candidate so much.”

Scarborough backed it up 100%.

In the face of each ludicrous lie told
when Kellyanne opens her pie hole,
those verbal contortions
of epic proportions
are worthy of Anderson’s eye roll.

“Even though you can see through the front door, the microwaves can’t penetrate through that,” […] “Maybe if you’re licking the door you might get a little exposure, but they’re in there to cook your food.”

Since Kellyanne Conjob has spoken,
I assume that my microwave’s broken.
While it’s cooking quite well,
still I never can tell
when its camera function’s awoken.

When its camera function awakes,
I will pose for the pictures it takes
in my ratty old gown
with a petulant frown
and a long finger flicking the flakes.

“A group of House Democrats is turning to legislation to call out President Trump and his White House for their history of false statements and disregarding the truth.

Well now, Kellyanne Conway has lately conceived
Of a new understanding of what to believe
When the truth gives you heartburn, don’t worry, relax
You can always resort to alternative facts!

Oh it works for the Donald and all of his hacks
As they go ’bout promoting their retrograde acts
Don’t fret if your documentation is lax
You can always get by with alternative facts!

Don’t fear all those women with signs on their backs
The straight and the queer, the whites and blacks
You can trivialize them with snide little cracks
And wash them away with alternative facts!

Just as loggers might swing an alternative ax
And fell a great tree with alternative whacks
When the truth won’t cooperate, try some new tacks
We live in an age of alternative facts!

One of the winning entries in the New York Times Donald Trump Poetry Contest,
republished on Rhyming Resistance with author’s permission.

“Keeping up with the trendy American spirit of categorizing and demonizing in these Trumpian times — and fueled by a great rush of optimism at the moment — I’m launching my own watchdog agency and database to keep up with deception in government.”

“‘This thing’ is more than disappointment by the defeat of Hillary Clinton, arguably the most qualified person to seek the office in recent memory who happens to be a woman.

After a campaign that mainstreamed white supremacy, xenophobia and misogyny, ‘this thing’ is palpable fear.”

Though he ran on a platform of hate,
still he surged on ahead out the gate.
So what does that say
’bout the US of A
that a man such as he is our fate.

With limericks readied to rock,
their humor may soften the shock
of troubles ahead that many now dread.
It’s Liberty’s head on the block.

When Kellyanne Conjob recites
alternative facts she ignites
a searing hot fire of Liberty’s ire
that burns for humanity’s rights.