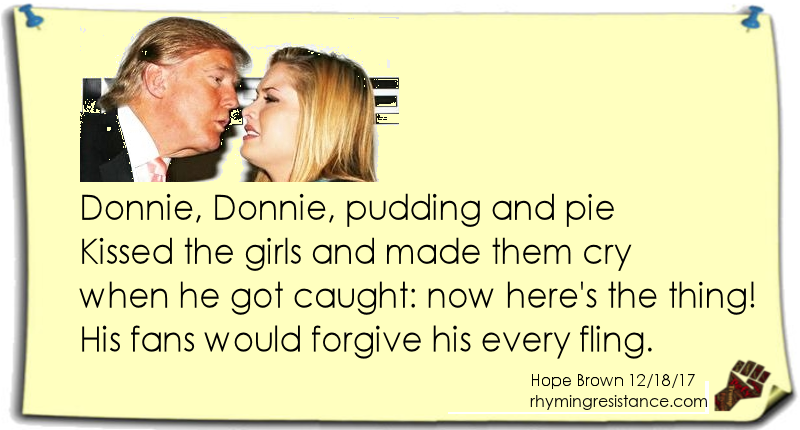 Samantha Holvey, Jessica Leeds and Rachel Crooks had previously made allegations against Trump and appeared on Megyn Kelly ‘Today’ to demand justice as the White House resumed its claim that the issue had been litigated in last year’s election.

After declining comment on the matter initially, the White House sprung a statement on Kelly in the middle of her program.

‘These false claims, totally disputed in most cases by eyewitness accounts, were addressed at length during last year’s campaign,’ the statement said, ‘and the American people voiced their judgement by delivering a decisive victory.’

It went on to say that the ‘timing and absurdity’ of the accusers’ claims, along with their ‘publicly tour’ they’ve started ‘only further confirms the political motives behind them.’

Crooks has contemporaneous emails that she sent her sister at the time of the alleged assault, in January of 2006, when Trump was already married to his third wife Melania. She said Monday that she’d be ‘more than happy’ for security footage to come out that proves the accuracy of her story.

She added, ‘He owns the building. I doubt that’s going to happen.’

Leeds says she began telling her story publicly once it became clear that Trump was serious about running for president.

As to whether the Democrat thought her allegation would be enough to keep him out of office, she said, ‘I don’t think I thought I had that kind of power. But I really wanted people to know who he is and what he is.

‘And I think his core supporters do know. I mean, I think they recognize. But he’s their dog, so they’re gonna stick with their dog,’ she said.

Donnie, Donnie, pudding and pie
Kissed the girls and made them cry
when he got caught: now here’s the thing!
His fans would forgive his every fling. 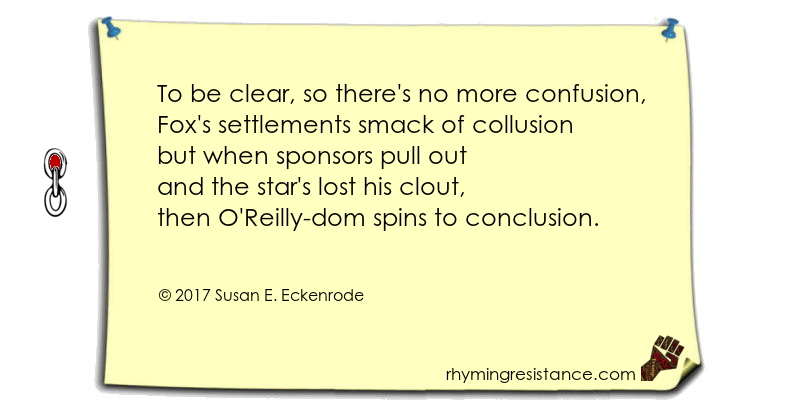 “That business has become more responsive to public outcry than elected officials isn’t anything to celebrate, but it is an opportunity for activists.”

Sadly it was money – not morals – that forced Fox to boot Bill O’Reilly
Lucia Graves, The Guardian 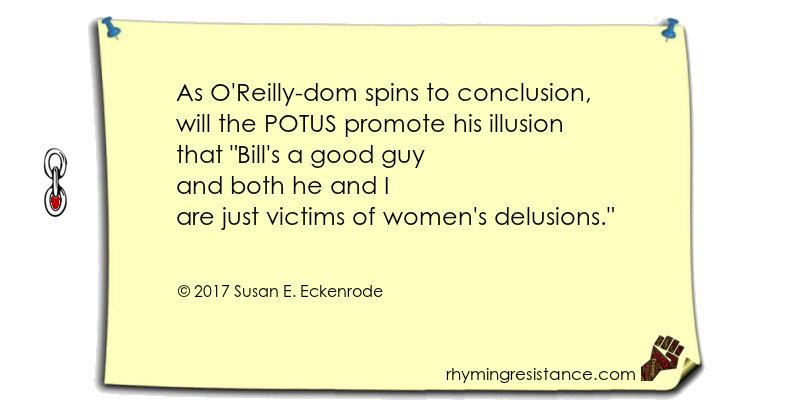 “We know whose back you have [Mr. President] and it’s not our half of the population’s. But hey, thanks for proclaiming April as National Sexual Assault Prevention Month. It helps draw attention to the widespread phenomenon of sex abuses in our cities, villages, schools, work places and homes.”

We know whose back you have, Mr. President: Not ours
Rehka Basu, The Des Moines Register

To be clear, so there’s no more confusion,
Fox’s settlements smack of collusion
but when sponsors pull out
and the star’s lost his clout,
then O’Reilly-dom spins to conclusion.

As O’Reilly-dom spins to conclusion,
will the POTUS promote his illusion
that “Bill’s a good guy
and both he and I
are just victims of women’s delusions.” 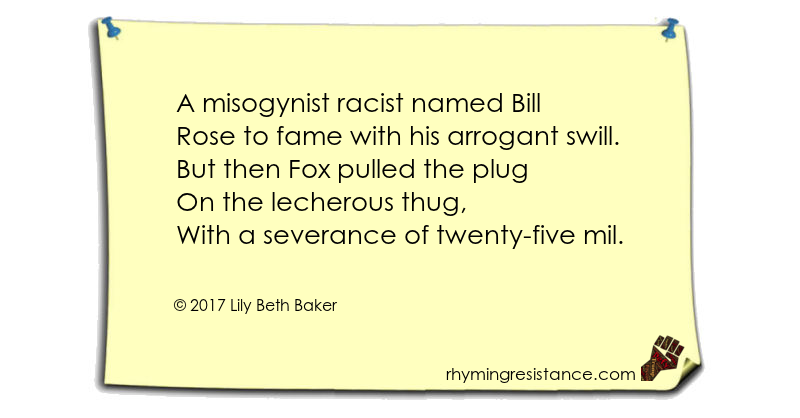 “Bill O’Reilly’s forced exit from Fox News is netting him a payout of up to $25 million, two sources with knowledge confirmed to NBC News.”

While O’Reilly was a star of the network, bringing in about 3.9 million viewers a night in recent months, Sherman said the accusations became too much — and even 21st Century Fox Chairman Rupert Murdoch could no longer justify keeping him on.

A misogynist racist named Bill
Rose to fame with his arrogant swill.
But then Fox pulled the plug
On the lecherous thug,
With a severance of twenty-five mil. 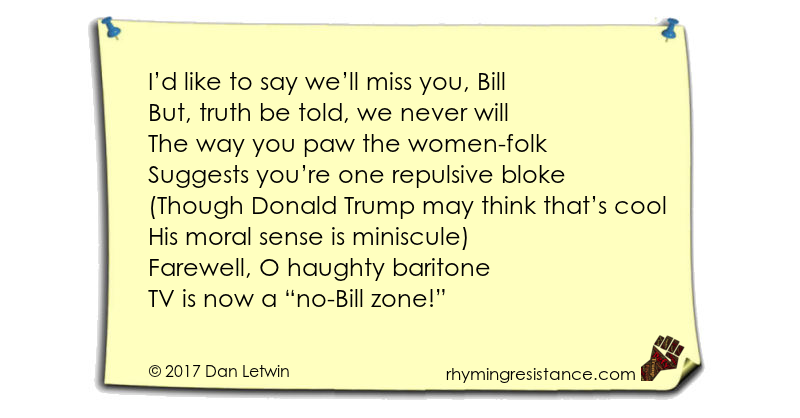 “More than 50 advertisers had abandoned his show, and women’s rights groups had called for him to be fired. Inside the company, women expressed outrage and questioned whether top executives were serious about maintaining a culture based on ‘trust and respect,’ as they had promised last summer when another sexual harassment scandal led to the ouster of Roger E. Ailes as chairman of Fox News.”

I’d like to say we’ll miss you, Bill
But, truth be told, we never will
The way you paw the women-folk
Suggests you’re one repulsive bloke
(Though Donald Trump may think that’s cool
His moral sense is miniscule)
Farewell, O haughty baritone
TV is now a “no-Bill zone!” 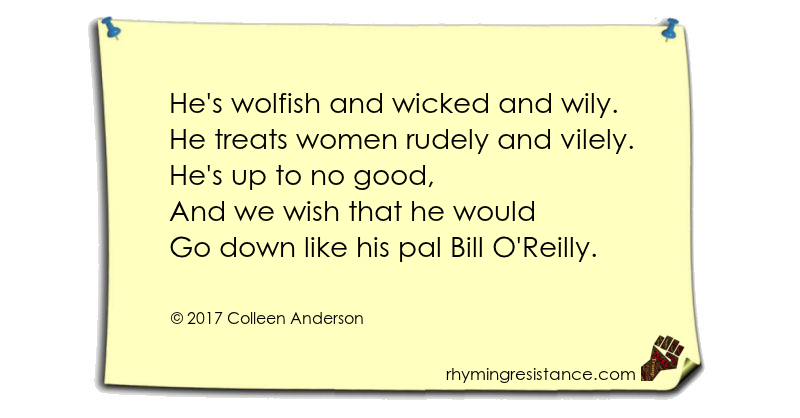 “The governing irony, of course, is that in the world according to O’Reilly and other cultural scolds, everyone else is wrong and they alone are the uncorrupted. Their spin is no-spin; their truth is the Truth. They promise their followers: Do as I say (but not as I do), and America will be its own best self again, whatever you perceive that to be. Moral certainty is their armor, and it allows them at times to be immorally cruel. It takes a very smug kind of meanness to watch Representative Maxine Waters speak passionately on race in the Trump era and only be able to crack a joke, as O’Reilly recently did, about her ‘James Brown wig.’ A very white kind of meanness, too.” 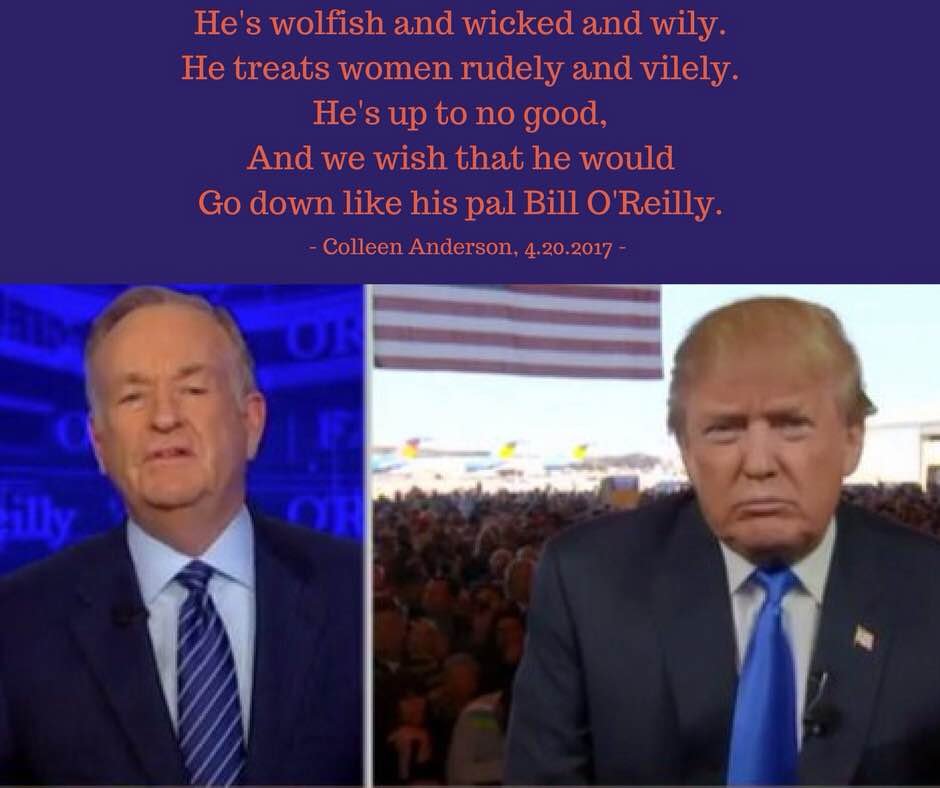 He’s wolfish and wicked and wily.
He treats women rudely and vilely.
He’s up to no good,
And we wish that he would
Go down like his pal Bill O’Reilly. 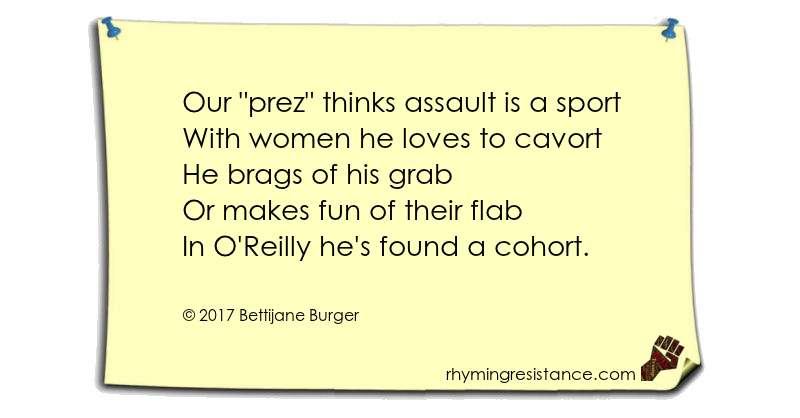 “There’s at least one person who’s defending O’Reilly, calling him “a good person” and even declaring “I don’t think Bill did anything wrong.”

That person is the President of the United States. Oh yeah, this is the same President who just proclaimed that this is sexual assault awareness month and touted the need to “protect vulnerable groups.” He does this by defending a powerful man repeatedly accused of sexual harassment? Talk about raising awareness.”

Our “prez” thinks assault is a sport
With women he loves to cavort
He brags of his grab
Or makes fun of their flab
In O’Reilly he’s found a cohort.