Created by Susan Eckenrode with image attribution if known. Click on any thumbnail to begin a slideshow.

Created by Susan Eckenrode with image attributions if known. Click on any thumbnail to begin a slideshow.

Created by Susan Eckenrode with image attributions if known. 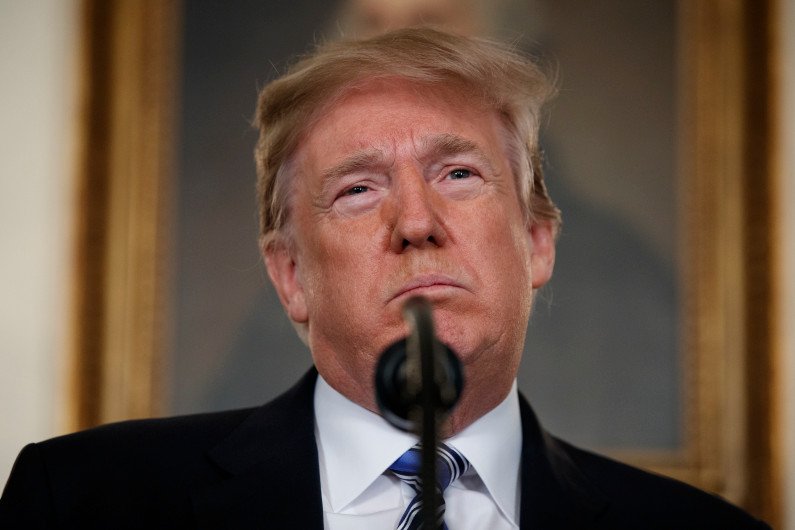 What fantasies are those of which you speak,
of all the ways you’ve made our country great;
how leaderships before yours were too weak
and how superior genes assure your fate.

Inheriting a fortune has its perks.
It let you hone your business expertise
and grow your fame by any means that works
to revel in each moment that you seize.

Your unrelenting braggadocio
of power fame and wealth your talents brought
are not enough and never will be so.
Your psyche will not find the worth it sought.

Your saddest bankruptcy is of your soul.
You’re squandering all hope to make it whole. 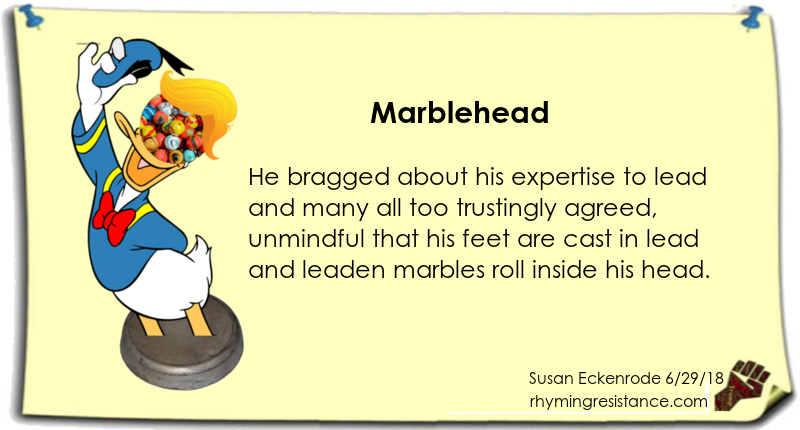 Trump’s behavior at the G7 summit, during which he’s railed against “unfair” trade practices with America’s closest allies, suggested allowing Russia back into the fold, threatening retaliatory tariffs, and criticized presidents going back to the Eisenhower administration, has been described as “harsh” even by Fox News. But for Harwood and his CNBC colleagues, it’s more concerning than that.

This is not the first time Trump’s mental health has come up in conversation. Back in April, as Vanity Fair reported at the time, Trump advisers, speaking on condition of anonymity, said that they were concerned with the president’s mental health. In particular, they were worried about what Trump might say or do during a five-day vacation at Mar-a-Lago with nothing on his schedule, in advance of a summit with Japanese prime minister Shinzo Abe.

Similarly, as Fox News reports, Trump’s personal physician, Dr. Ronny Jackson, endured a barrage of questions about the president’s mental health. Jackson tried to ease concerns by pointing out that the president had scored perfectly on a cognitive test that included being told to draw a clock.

Lost his mind long ago, no doubt, but is he also losing the support of his base?

He bragged about his expertise to lead
and many all too trustingly agreed,
unmindful that his feet are cast in lead
and leaden marbles roll inside his head. 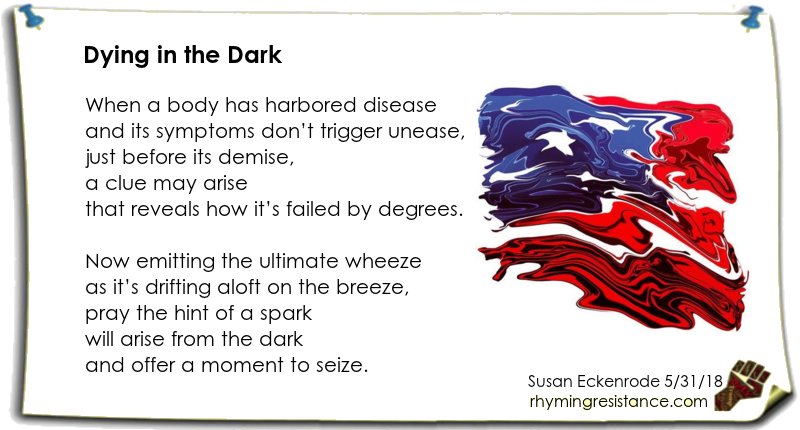 I couldn’t help noticing the contemporary resonances of some Roman history — specifically, the tale of how the Roman Republic fell.

Here’s what I learned: Republican institutions don’t protect against tyranny when powerful people start defying political norms. And tyranny, when it comes, can flourish even while maintaining a republican facade.

One thing all of this makes clear is that the sickness of American politics didn’t begin with Donald Trump, any more than the sickness of the Roman Republic began with Caesar. The erosion of democratic foundations has been underway for decades, and there’s no guarantee that we will ever be able to recover.

But if there is any hope of redemption, it will have to begin with a clear recognition of how bad things are. American democracy is very much on the edge.

When a body has harbored disease
and its symptoms don’t trigger unease,
just before its demise,
a clue may arise
that reveals how it’s failed by degrees.

Now emitting the ultimate wheeze
as it’s drifting aloft on the breeze,
pray the hint of a spark
will arise from the dark
and offer a moment to seize. 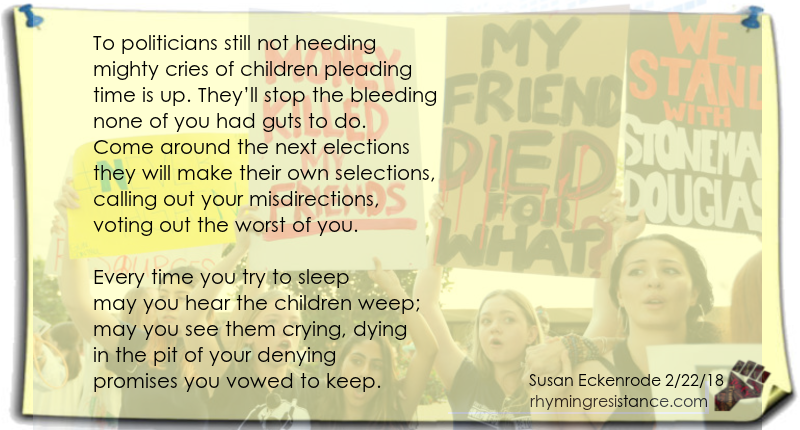 Many at a rally in Fort Lauderdale that was organized to demand tougher gun laws rejected comments by U.S. President Donald Trump and others that mental illness was the main factor behind the slaughter at Margory Stoneman Douglas High School.

“We need to pay attention to the fact that this isn’t just a mental health issue,” Emma Gonzalez, an 18-year-old student at the school, told hundreds demonstrators gathered on the steps of a federal building. The shooter “wouldn’t have harmed that many students with a knife!” she yelled, shedding tears as the crowd cheered her on.

Gonzalez criticized Trump for overturning a measure implemented by former President Barack Obama that required extra scrutiny of some gun buyers with a history of mental illness. She also condemned the National Rifle Association, which opposes laws that it says violate gun owners’ rights.

“Politicians who sit in their gilded House and Senate seats funded by the NRA telling us nothing could have ever been done to prevent this, we call B.S.” Gonzalez said.

To politicians still not heeding
mighty cries of children pleading
time is up. They’ll stop the bleeding
none of you had guts to do.
Come around the next elections
they will make their own selections,
calling out your misdirections,
voting out the worst of you.

Every time you try to sleep
may you hear the children weep;
may you see them crying, dying
in the pit of your denying
promises you vowed to keep. 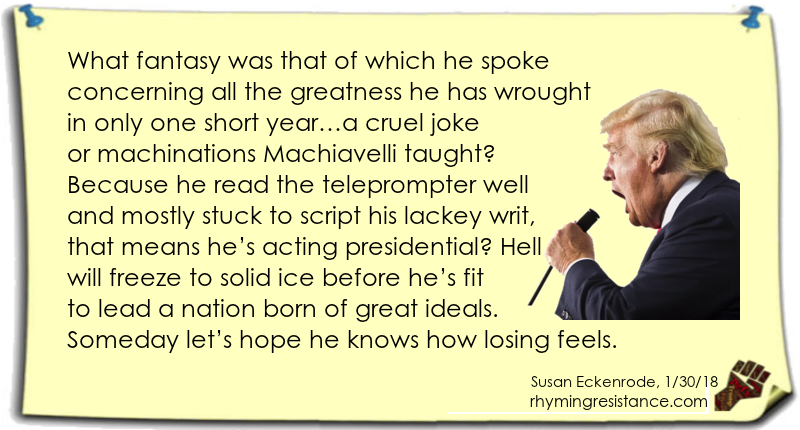 It was the most elaborate of charades, the most sophisticated of masquerades, that played itself out in the chamber of the House of Representatives on Tuesday night. The amount of pretense required to keep all sensible people—which is to say, any person who was not a Republican—in their chairs must have been heroic.

All involved had to pretend that Donald Trump makes sense as a president, that his administration makes sense as a government, and that his first State of the Union address made sense as either a description of national policy, or as a rhetorical summons to national unity. All involved had to pretend that his thoughts were coherent, that his words made sense, and that the complete and universal collapse of civic responsibility that propelled him onto the podium was not the most singularly destructive event in the history of American democracy since the Civil War. Everyone had to pretend that a freak show was Shakespeare, and that a rumbling, stumbling geek was Lincoln, and that the whole tableau unfolding before the Congress was somehow made noble despite the obvious fact that the whole event was an endless procession of lies and half-truths, and that the only truly remarkable thing about the speech was that it was such a perfectly round and complete crock of shit.

Continue reading …
I Watched a Ghoulish Masquerade in Washington

What fantasy was that of which he spoke
concerning all the greatness he has wrought
in only one short year…a cruel joke
or machinations Machiavelli taught?
Because he read the teleprompter well
and mostly stuck to script his lackey writ,
that means he’s acting presidential? Hell
will freeze to solid ice before he’s fit
to lead a nation born of great ideals.
Someday let’s hope he knows how losing feels.

It’s almost a courtesy from President Trump: rather than get our hopes up with calm, careful, magnanimous tweets to kick off the new year, we’re back into freezing cold reality. None of the president’s nine tweets Tuesday morning were particularly reassuring to those of us concerned about the future of our country or planet. That particularly goes for those of us who think thermonuclear war sounds like kind of a drag.

My big, powerful button. There’s a real macabre fascination to our current national experiment, wherein we’ve given unprecedented powers of destruction to an obviously stunted man whose mind is stuck in a high-school locker room. In case you were wondering, there is not actually a button on the president’s desk—besides the one with which he summons a butler to bring him Diet Cokes, which he apparently presses 12 times a day. However, it is within this individual’s power to unilaterally launch a nuclear weapon at any time. Once again, Happy Freakin’ New Year.

“My nuclear button’s much bigger than his,
and my button works!” It’s a Trumpian tiz.
Our president’s recklessly juvenile quips
could tick off a tyrant with missiles on ships
Our generals caution that war is no game
but Trump doesn’t care if it furthers his fame.