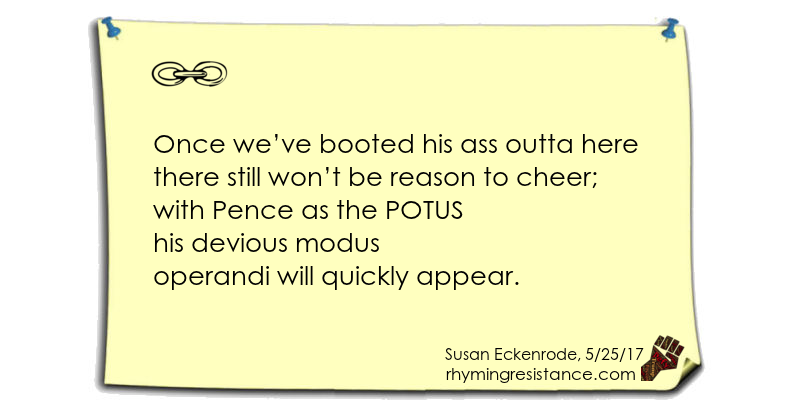 With talk of Trump being impeached being just talk now, it’s impossible to know who Pence might nominate as his vice president should he be forced to assume the role of president. Would he opt to elevate Speaker of the House Paul Ryan to the role of vice president, or would he nominate a fellow Tea Partier like Sarah Palin? While too soon to tell, it’s important to remember that whomever Pence might nominate to succeed him as vice president should he become POTUS, could also, according to the presidential order of succession, potentially succeed him to the presidency.

Who Would Be Vice President If Trump Is Impeached?
Bustle

Once we’ve booted his ass outta here
there still won’t be reason to cheer;
with Pence as the POTUS
his devious modus
operandi will quickly appear. 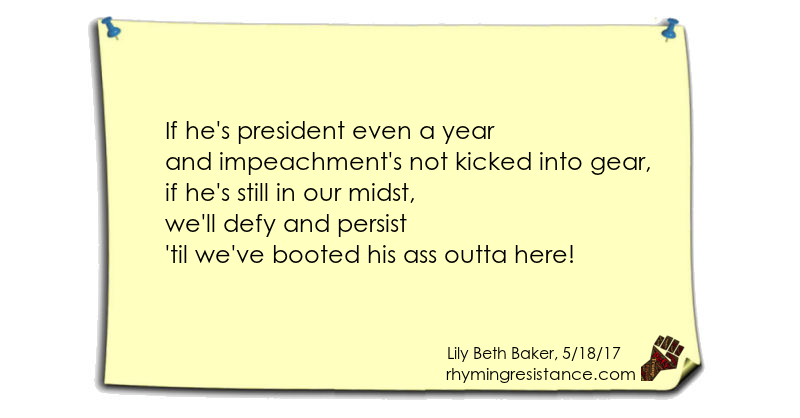 “I know that there are those who are talking about, ‘Well, we’re going to get ready for the next election,’” she [Representative Maxine Waters] said, mimicking her more cautious colleagues. “No, we can’t wait that long. We don’t need to wait that long. He will have destroyed this country by then.”

Liberals are planning a series of nationwide protests on July 2 known as “Impeachment Marches” to increase the pressure.

“We expect them to call for impeachment,” said Delia Brown, one of the organizers of the march in Los Angeles. “This is now the zeitgeist, it’s the demands of people we’re responding to.”

If he’s president even a year
and impeachment’s not kicked into gear,
if he’s still in our midst,
we’ll defy and persist
’til we’ve booted his ass outta here! 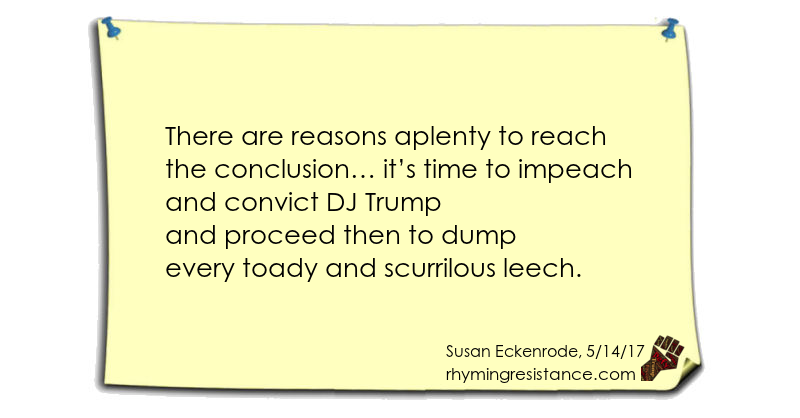 Even without getting to the bottom of what Trump dismissed as “this Russia thing,” impeachable offenses could theoretically have been charged from the outset of this presidency. One important example is Trump’s brazen defiance of the foreign emoluments clause, which is designed to prevent foreign powers from pressuring U.S. officials to stray from undivided loyalty to the United States. Political reality made impeachment and removal on that and other grounds seem premature.

No longer. To wait for the results of the multiple investigations underway is to risk tying our nation’s fate to the whims of an authoritarian leader.

Trump must be impeached. Here’s why.
Laurence H. Tribe, Opinion, The Washington Post

There are reasons aplenty to reach
the conclusion… it’s time to impeach
and convict DJ Trump
and proceed then to dump
every toady and scurrilous leech. 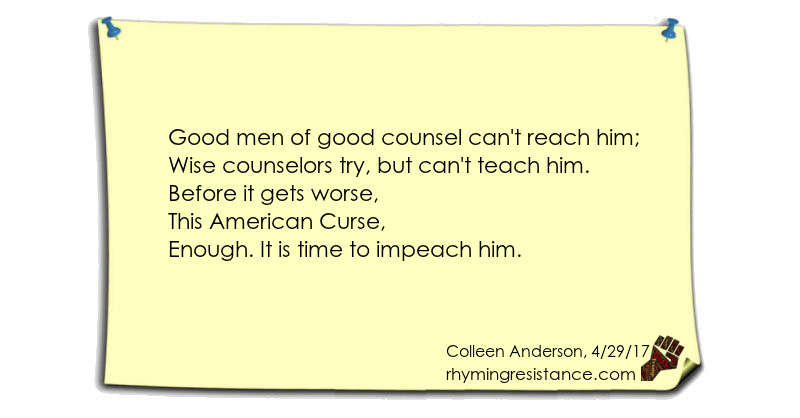 “We have as president an unhinged narcissistic child who tweets absurd lies and holds rallies to prop up his fragile ego, whose conflicts of financial interest are ubiquitous and whose presidency is under a ‘gray cloud’ of suspicion (according to the Republican chairman of the House Intelligence Committee) for colluding with Russian agents to obtain office in the 2016 election.”

ROBERT REICH: WHERE ARE THE GROWN-UPS IN THE WHITE HOUSE?
Newsweek

Good men of good counsel can’t reach him;
Wise counselors try, but can’t teach him.
Before it gets worse,
This American Curse,
Enough. It is time to impeach him.

“The latest disclosures — and the Trump administration’s contradictory accounts of them — have deepened the questions about Russia’s role in the election and its aftermath. The affair has fueled calls for congressional and independent investigations, and toppled another close Trump aide, Michael T. Flynn, who resigned as national security adviser last month after admitting he had misled the administration over his contacts with Mr. Kislyak.”

“The National Security Agency risks a brain-drain of hackers and cyber spies due to a tumultuous reorganization and worries about the acrimonious relationship between the intelligence community and President Donald Trump, according to current and former NSA officials and cybersecurity industry sources.”

With Flynn off the stage and away,
Now Sessions leaps into this play.
Just watching them dance
In their bright, flaming pants—
It’s a virtual Russian ballet!

It’s a virtual Russian ballet
as the chorus jumps into the fray,
and their pants are on fire,
with flames leaping higher.
Begin the impeachment today!

Begin the impeachment today.
Let truthfulness now have a say
by shining its light
on all that’s not right
while keeping the Russians at bay.

While keeping the Russians at bay
requires a commitment to stay
restrained but alert,
we all could get hurt
if intelligence analysts stray.