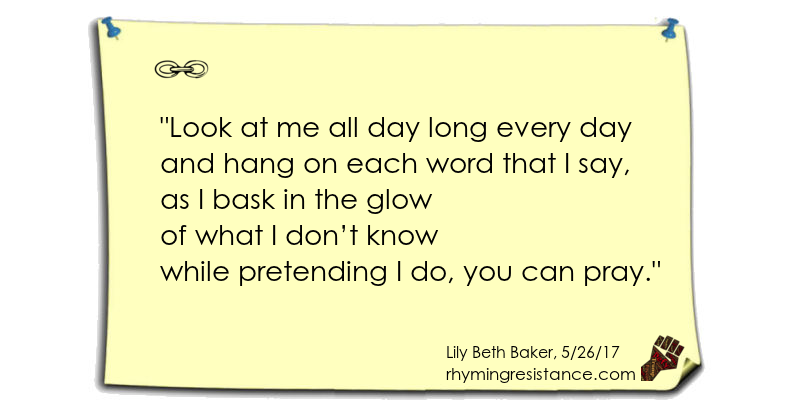 America is a naturally narcissistic nation. From “exceptionalism” to being the “last best hope of Earth,” we are raised to believe that life on this planet revolves around those of us who live somewhere here in “God’s country.” But even with a history of believing that we are the sun around which all other countries orbit, it has fallen to our nation’s narcissist-in-chief to take us to a level of self-obsession that makes Kanye West look like Thomas Merton.

It is not just that Donald Trump is an egomaniac. Most presidents have a pathological need for approval and attention. It’s why they suffer the slings and arrows that come with seeking the country’s top office. Egomania is for Hollywood actors and House committee chairmen who think the rule of law doesn’t apply to them. Trump is a Transcendental Solipsist. It is not just that he has a strong sense of self. His view of the universe does not extend a single inch beyond the boundaries of his own interests. That is why normative concepts like truth or commonly held values or the national interest are completely alien to him. There is Trump world, and then there is oblivion.

If you doubt that the impact of the shift to All Trump, All the Time News is making it hard to focus on much of what might otherwise be worthy of our attention consider this: Since taking office, the Trump administration has ramped up military operations in Yemen and Iraq; committed to deploying over 1,000 additional troops in Syria; stood by as civilian casualties have soared and watched as a strategically important province in Afghanistan fell to the Taliban — all without making so much as a ripple in the public consciousness of the United States.

“Look at me all day long every day
and hang on each word that I say,
as I bask in the glow
of what I don’t know
while pretending I do, you can pray.” 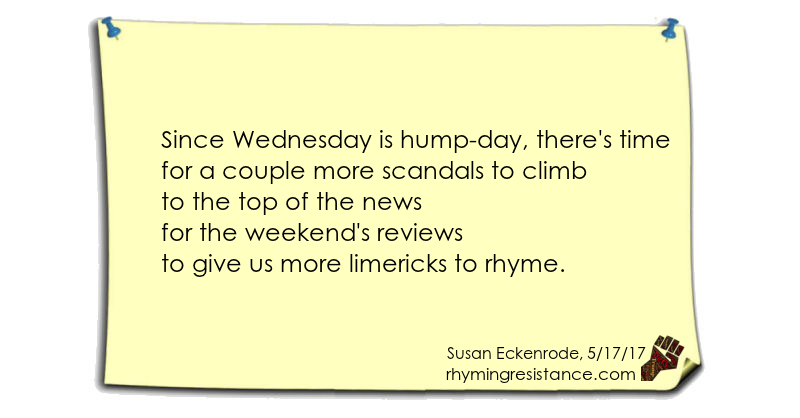 Trump’s tumultuous first months have unfolded like a tape of earlier presidential crises played on fast-forward. […] New controversies routinely crash into the White House before the beleaguered staff has recovered from the previous wave. The master of the accelerated news cycle is now its victim. Democratic leaders, recognizing that dynamic, are deferring talk of impeachment while pushing for an independent investigation.

Events are pressing on Trump so quickly that it’s hazardous to project his current support from his party too far into the future. Congressional Republicans aren’t defending Trump because of deep personal loyalty. Instead the GOP alliance with Trump is rooted in shared political interests. […]

The safe prediction is that congressional Republicans will not mount any serious attempt to force Trump from office before exhausting all other possibilities, such as an imposed staff reshuffle or even embracing demands for an independent counsel as a way to temporarily push the issue off of their plate. But the lesson of Trump’s perpetual turmoil is that further developments, like compelling public testimony from Comey, may disrupt their timetable. An effort to remove him may never coalesce. But it’s no longer impossible to envision that it will—and that alone measures how much damage Trump has absorbed during these tumultuous seven (or so) days in May.

Trump Is Testing the GOP’s Limits
The Atlantic

Since Wednesday is hump-day, there’s time
for a couple more scandals to climb
to the top of the news
for the weekend’s reviews
to give us more limericks to rhyme. 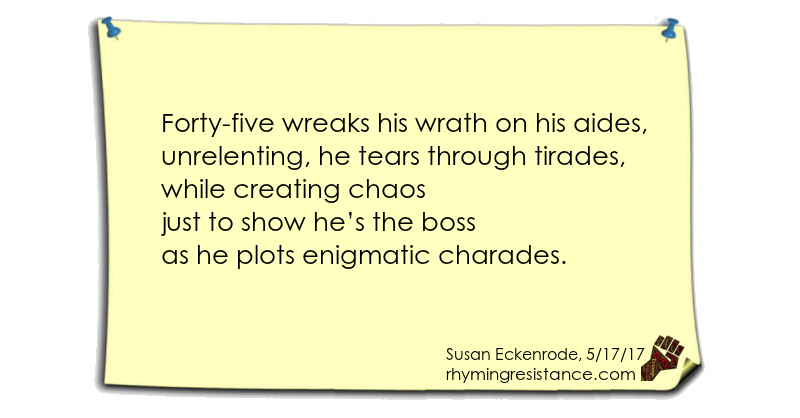 The president’s appetite for chaos, coupled with his disregard for the self-protective conventions of the presidency, has left his staff confused and squabbling. And his own mood, according to two advisers who spoke on the condition of anonymity, has become sour and dark, and he has turned against most of his aides — even his son-in-law, Jared Kushner — describing them in a fury as “incompetent,” according to one of those advisers.

The stress was taking its toll. Late Monday, reporters could hear senior aides shouting from behind closed doors as they discussed how to respond after Washington Post reporters informed them of an article they were writing that first reported the news about the president’s divulging of intelligence.

There is a growing sense that Mr. Trump seems unwilling or unable to do the things necessary to keep himself out of trouble and that the presidency has done little to tame a shoot-from-the-hip-into-his-own-foot style that characterized his campaign.

Forty-five wreaks his wrath on his aides,
unrelenting, he tears through tirades,
while creating chaos
just to show he’s the boss
as he plots enigmatic charades. 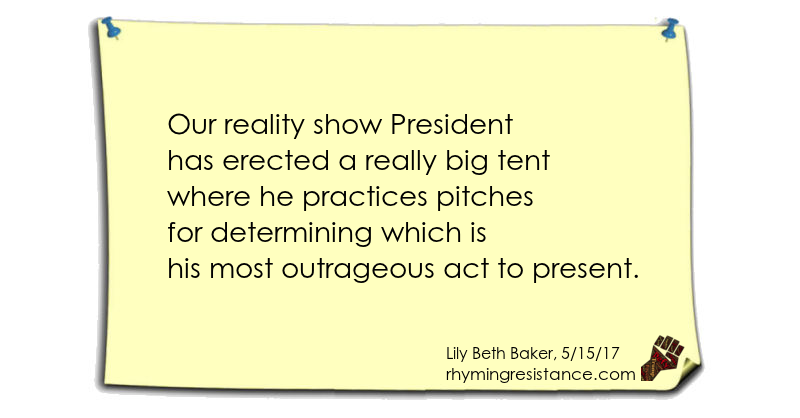 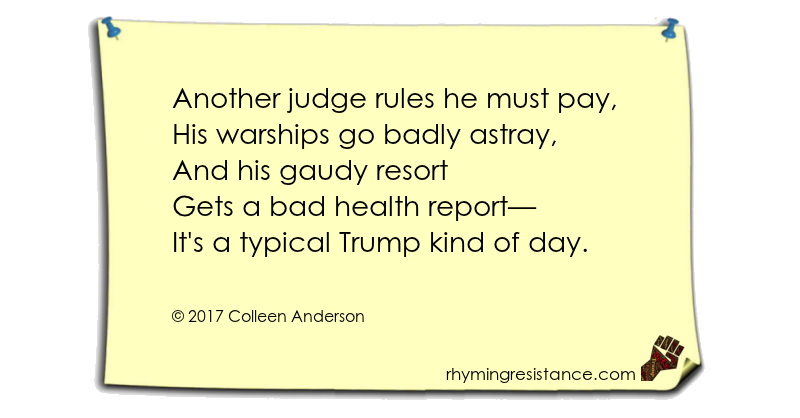 Did Trump and military get it wrong about San Diego warships rushing to North Korea?
The San Diego Union Tribune 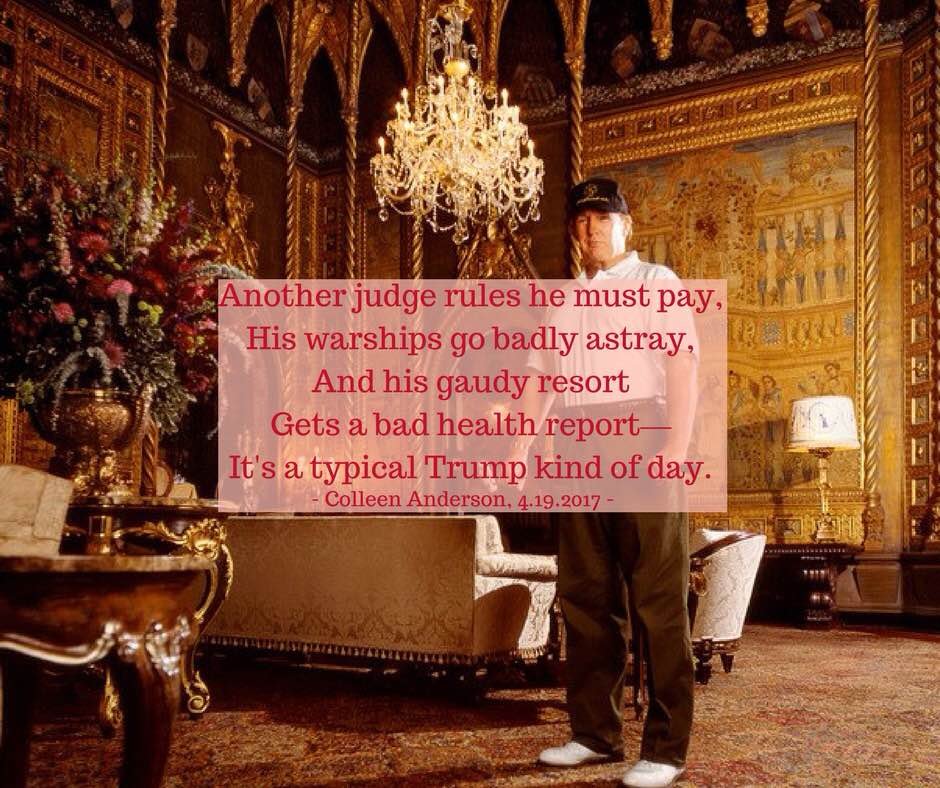 Another judge rules he must pay,
His warships go badly astray,
And his gaudy resort
Gets a bad health report—
It’s a typical Trump kind of day.

Want to beef up your critical thinking skills? Register now for a 6-week class in Making Sense of the News: News Literacy Lessons for Digital Citizens. No charge to audit.

“Never before has the need for News Literacy been more urgent. As news consumers are bombarded with a constant stream of fake news, propaganda, hoaxes, rumors, satire, and advertising — that often masquerade as credible journalism — it is becoming more and more difficult to distinguish fact from fiction. While the public’s faith in the news media erodes, purveyors of misinformation have helped give rise to troubling cultural trends and alarming political movements.”  – Coursera

Greed and Power claim their own.
Chaos reigns without filtration.
Seeking out a buffer zone
takes a heap of dedication.
Spend a moment in the light.
Anger mounting by the hour
convolutes the skill to fight
Greed and Power.