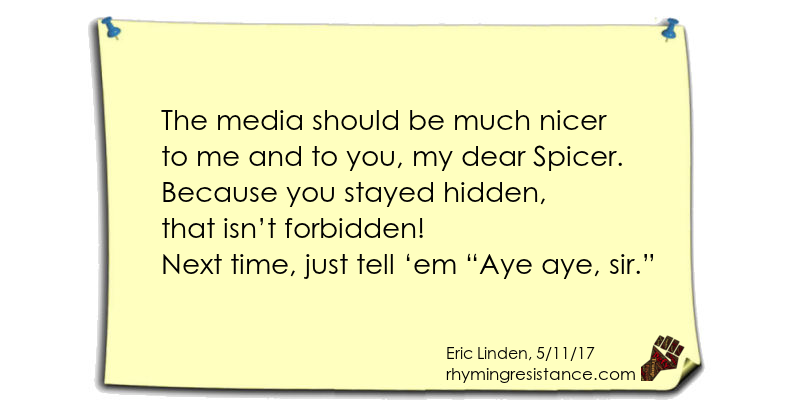 In Friday’s briefing, White House press secretary Sean Spicer denied that a tweet from President Trump threatening former FBI director James B. Comey was a threat, insisted that the president maintained a busy schedule and therefore it was hard to be accurate all the time, dodged a question about whether the president tapes White House meetings, boasted about how hard his people work, uttered the mantra “the tweet speaks for itself,” maintained that his shop didn’t, in fact, mislead the public about the rationale for Comey’s firing, even though it clearly did, and lamented how the media is obsessed with small things.

Another day at the office, in other words.

The media should be much nicer
to me and to you, my dear Spicer.
Because you stayed hidden,
that isn’t forbidden!
Next time, just tell ‘em “Aye aye, sir.” 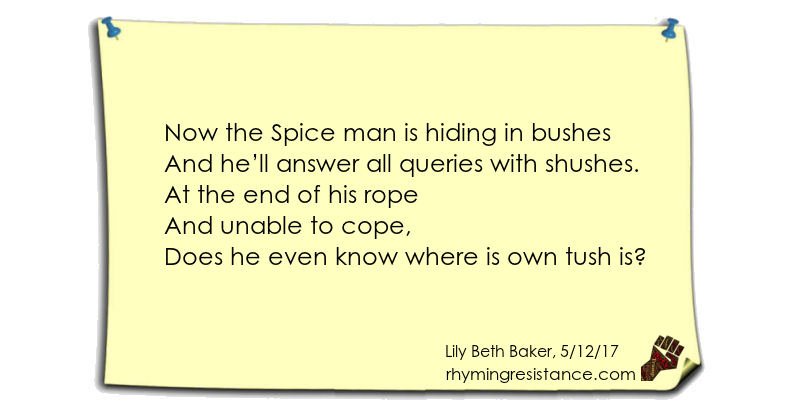 “Whatever Spicer’s fate, the scrambled effort to address Comey’s firing has revealed something significant about this White House, which is that its press secretary is growing increasingly irrelevant.

“Already beset by critics who say he has lost his credibility, Spicer may now be losing his authority. His charge is to tell the media, and the public, what the president is thinking. And yet it is becoming increasingly clear that he is either not able to fulfill that task, or choosing not to.” 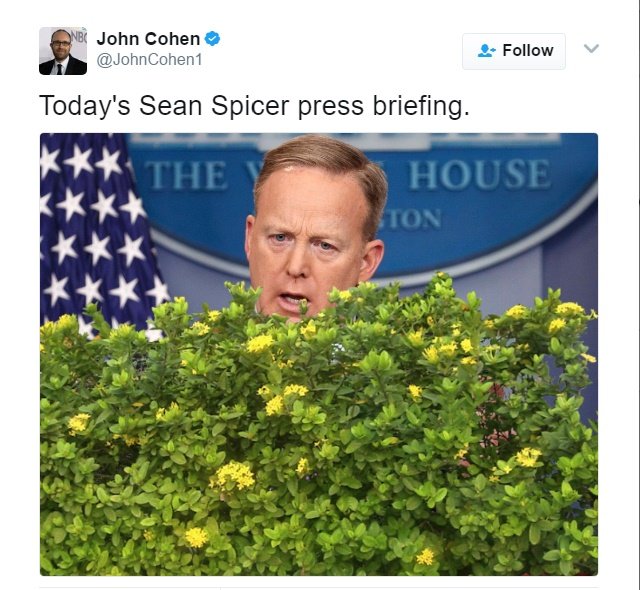 Now the Spice man is hiding in bushes
And he’ll answer all queries with shushes.
At the end of his rope
And unable to cope,
Does he even know where is own tush is? 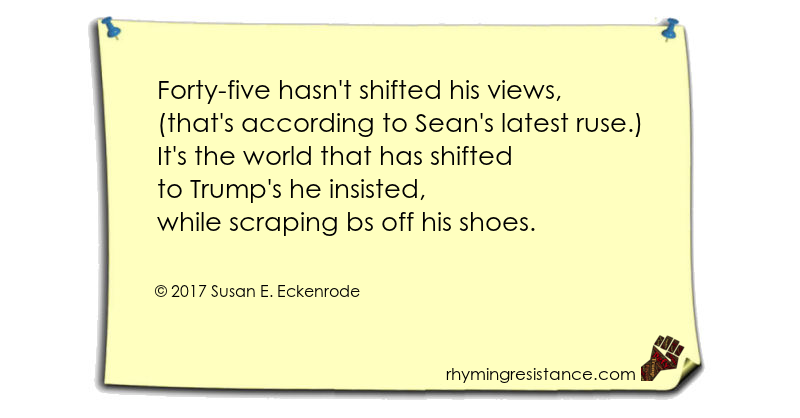 “President Donald Trump has reversed his position on at least six major issues this week, giving up pledges he made on the campaign trail and repeatedly touted to his base.”

Forty-five hasn’t shifted his views,
(that’s according to Sean’s latest ruse.)
It’s the world that has shifted
to Trump’s he insisted,
while scraping bs off his shoes. 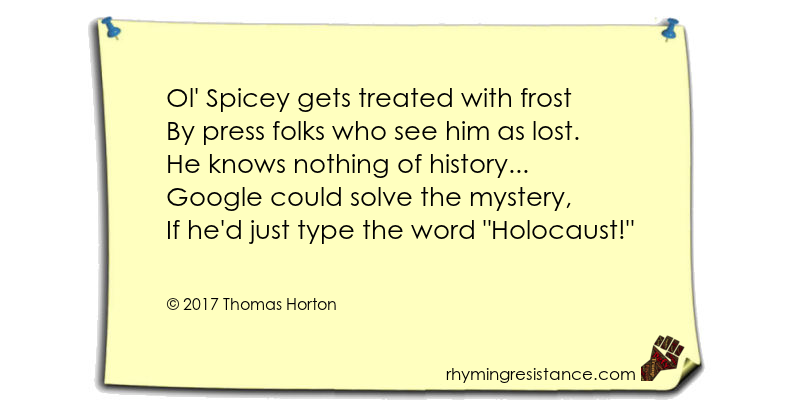 “In misconstruing the facts of the Holocaust — Nazi Germany’s brutally efficient, carefully orchestrated extermination of six million Jews and others — Mr. Spicer instead drew a torrent of criticism and added to the perception that the Trump White House lacks sensitivity and has a tenuous grasp of history.”

Ol’ Spicey gets treated with frost
By press folks who see him as lost.
He knows nothing of history…
Google could solve the mystery,
If he’d just type the word “Holocaust!” 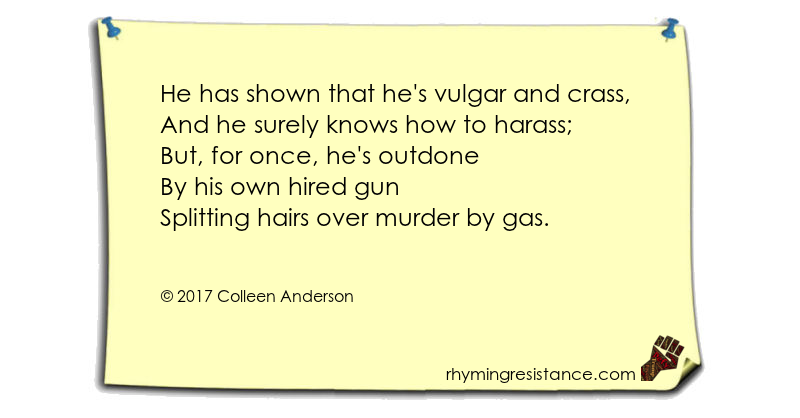 Spicer said he has not spoken to the president about his widely condemned mistake from the podium Tuesday during the White House press briefing.

‘I sought people’s forgiveness because I screwed up,’ he said in a subdued tone.” 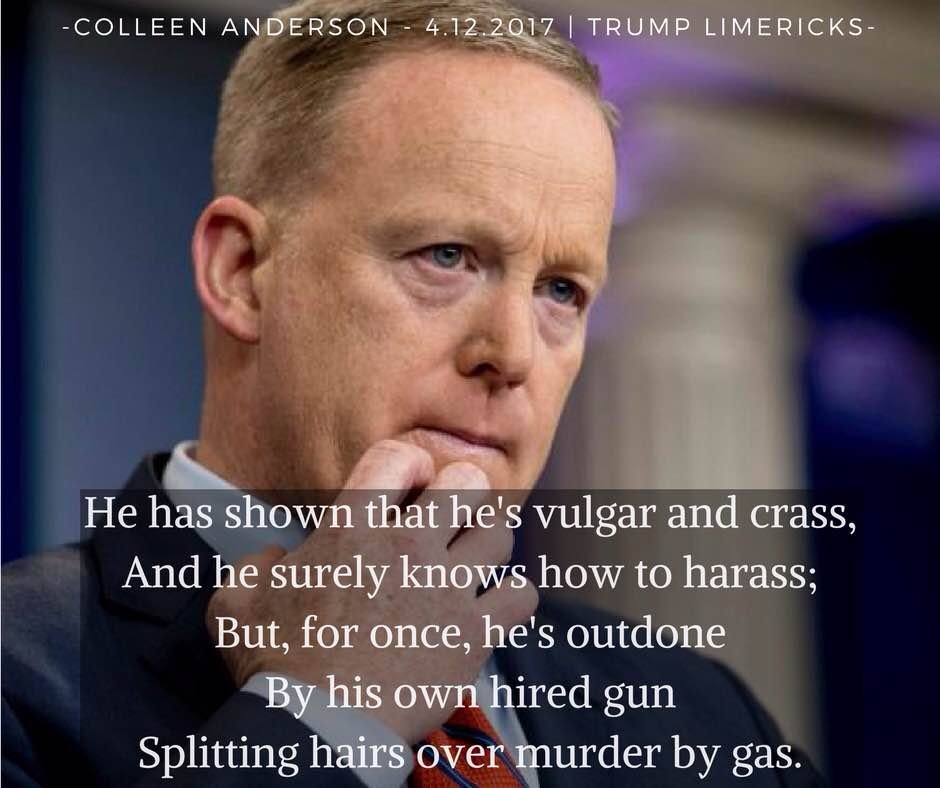 He has shown that he’s vulgar and crass,
And he surely knows how to harass;
But, for once, he’s outdone
By his own hired gun
Splitting hairs over murder by gas. 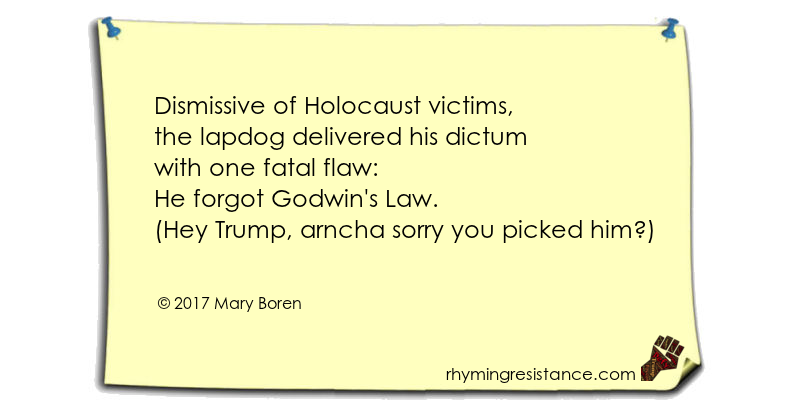 ‘You had someone who was as despicable as Hitler who didn’t even sink to using chemical weapons,’ he said. ‘So you have to, if you are Russia, ask yourself is this a country that you and a regime that you want to align yourself with.’

Er, what? Hitler, of course, used lots and lots of chemical weapons — in the sense that he ordered the executions of millions of Jews in gas chambers during World War II.

Given that history, Spicer was asked later in the briefing to clarify his comments. In trying to do so, he made it worse.

Dismissive of Holocaust victims,
the lapdog delivered his dictum
with one fatal flaw:
He forgot Godwin’s Law.
(Hey Trump, arncha sorry you picked him?) 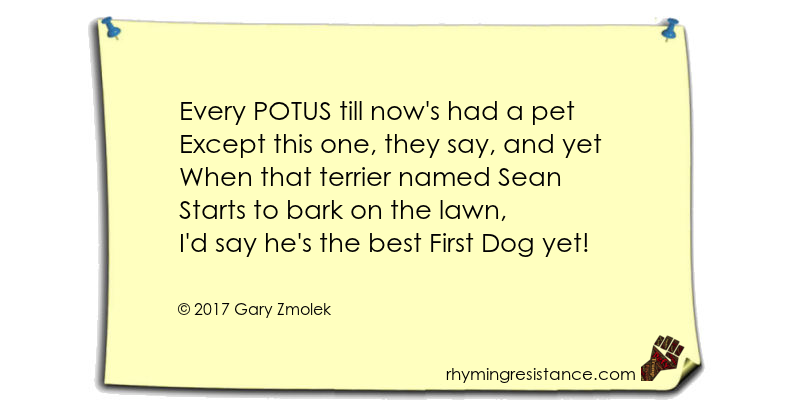 “Tracking Spicer’s broadsides against Politico may require deployment of an Erik Wemple Contractor Blog. As we reported earlier this year, Spicer & Co., with the able assistance of the Washington Examiner, perpetrated a gutter-level slime job against Politico reporter Alex Isenstadt, who at the time was reporting a critical story about the press secretary’s management approach. Prior to assuming his current post, Spicer openly hammered the decade-old political website.”

Sean Spicer on Politico reporter: ‘an idiot with no real sources’
The Washington Post

Every  POTUS till now’s had a pet
Except this one, they say, and yet
When that terrier named Sean
Starts to bark on the lawn,
I’d say he’s the best First Dog yet!