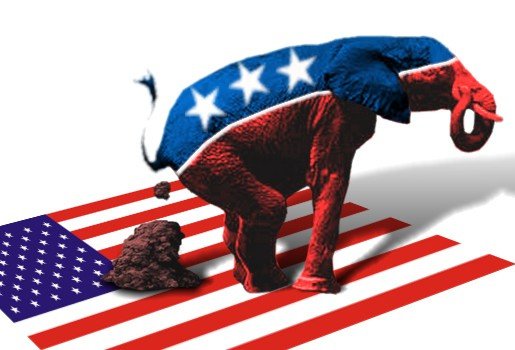 Just say no to every bill,
The poor will feel a bitter pill.
Cut the tax rate of the rich to zero
We’ll become their tea party hero

Just say no to Obama so
we can see this President go
No more help for the unemployed
Make Corporations overjoyed.

We pledge to the Corporate heads,
We will cut taxes and their overhead
We’ll be sure to destroy the masses
The poor and needy can kiss our asses. 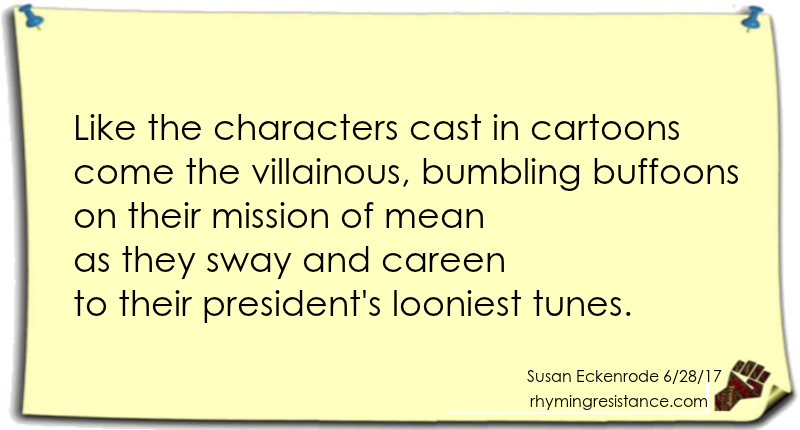 “We found out today that the GOP healthcare bill could leave 22 million uninsured,” he explained, “which may be why Republicans are trying a new tactic to defend it: lying.”

Like the characters cast in cartoons
come the villainous, bumbling buffoons
on their mission of mean
as they sway and careen
to their president’s looniest tunes. 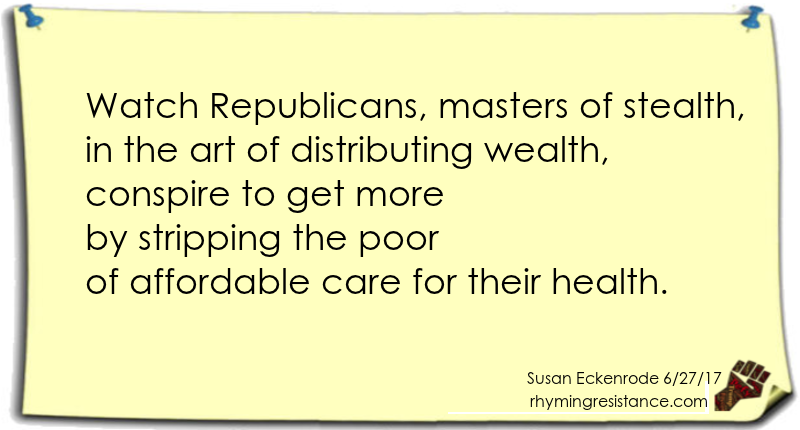 “The Republican health care bill would not affect Americans equally. Older, poorer people would see big reductions in coverage and cost increases, according to a report from the nonpartisan Congressional Budget Office.”

“Repeal and replace” was his boast.
Diabetes or cancer? You’re toast.
It’s an unjust dessert,
For TrumpCare will hurt
The people who trusted him most.

To the people who trusted him most
( ’cause at rallies he’s such a fun host)
it is all bait and switch,
a self-serving pitch.
Will democracy give up the ghost?

Will democracy give up the ghost?
Will his followers, blindly engrossed
in his treacherous lies
pull the beam from their eyes
when he’s plundered from mountains to coast?

“Republicans in Congress have long vowed that they can make health care more affordable and accessible. Americans will now see if they can keep that promise.”

Who wins and who loses under Obamacare replacement bill
CNN Money

Repeal and replace it entire?
Just throw the whole thing in the fire?
There’s much that is good
Just admit it, you should!
Why not just repair, we inquire?

We don’t know yet what the CBO will say, but it seems fairly clear that their forecast will show a significant drop in the number of people with insurance coverage if Obamacare is repealed and/or the Republican American Health Care Act were to become law.

How many people would lose health-care coverage under the new House bill? Depends who you ask.
The Washington Post

Obamacare wasn’t his pick,
So he’s slapped something up, on the quick,
That gives the rich more
By neglecting the poor.
He is Making America Sick.

Yes, he’s making America sick.
How much does he care? Not a lick!
He just follows the lead
of Republicans’ need
to crush ACA like a tick.

To crush ACA like a tick–
a nearly impossible trick.
Why not make a cause
of fixing the flaws
and give it a boost not a kick.

Give it a boost, not a kick:
In the challenging, vast bailiwick
of the legal affair
for our medical care,
find compassion, and spread it on thick.

Republicans on a pivotal House committee scored an initial triumph in their effort to scuttle former President Barack Obama’s healthcare overhaul, using a predawn vote Thursday to abolish the tax penalty his statute imposes on people who don’t purchase insurance and reshaping how millions of Americans buy medical care.

While the ground of Democracy shook
the empowered Republicans took
their constituents’ vote
as a mandate to float
every dirty old trick in the book.