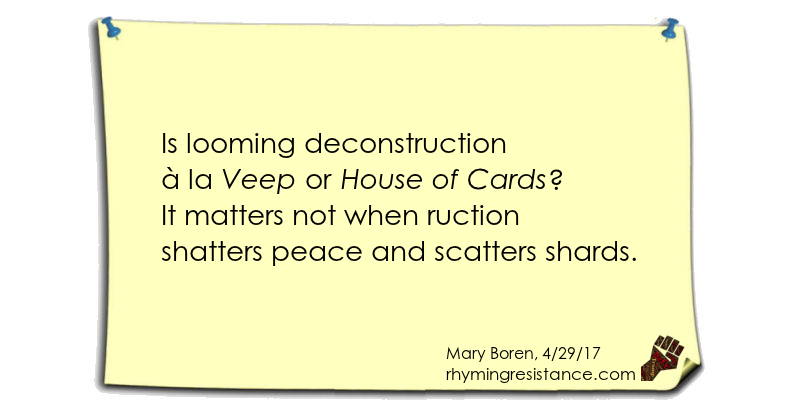 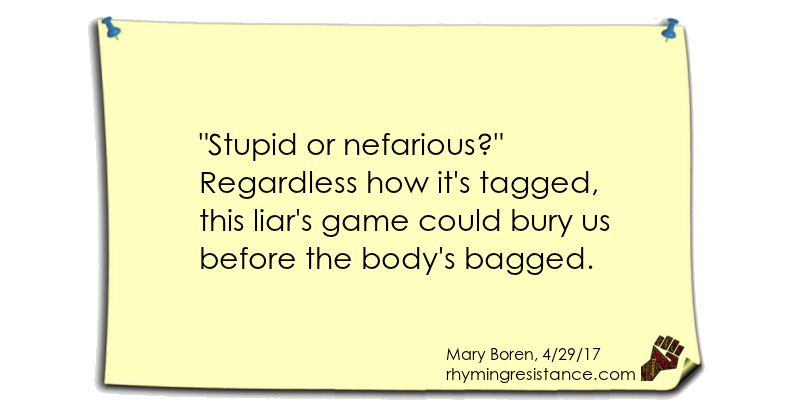 “Covering the Trump administration is difficult because it requires disentangling three strands of its behavior: the normal, the incompetent, and the dangerous.
[…]
“How seriously you take these behaviors depends on how you assess the motivations behind them, generating a game that some have taken to calling ‘Stupid or nefarious?’ or ‘Veep or House of Cards?'”

Is looming deconstruction
à la Veep or House of Cards?
It matters not when ruction
shatters peace and scatters shards.

“Stupid or nefarious?”
Regardless how it’s tagged,
this liar’s game could bury us
before the body’s bagged. 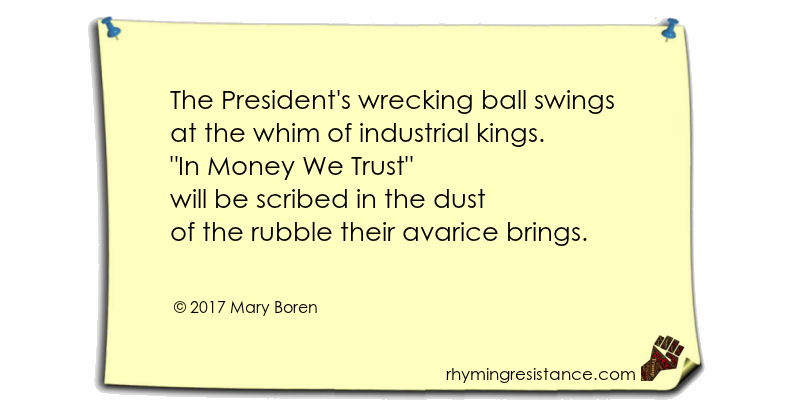 “Mr. Trump made clear that the United States had no intention of meeting the commitments that his predecessor had made to curb planet-warming carbon dioxide pollution, turning denials of climate change into national policy.”

The President’s wrecking ball swings
at the whim of industrial kings.
“In Money We Trust”
will be scribed in the dust
of the rubble their avarice brings.

One could infer a lot about Trump’s goals for the next four years from what Bannon said. Here are some of the most interesting passages and some of his more interesting word choices:

Bannon proffered his plan from the start;
deconstruct and replace is its heart.
With the crew all on board,
now they’re swinging the sword,
while Distractor-in-Chief does his part.

© 2017 Lily Beth Baker
The Distractor-in-Chief does his part,
By choosing his tweets à la carte
From a mish-mash of news
That is ripe with pee-yews
And usually comes out as a fart.

Each tweet that comes out as a fart
is more foolish and putrid and tart.
With his juvenile sprees
he has launched a disease
that is ripping the country apart.

What would Trump and Bannon ‘deconstruct’?
The Washington Post

The Bannon Bunch,
the Bannon Bunch,
They’ll deconstruct your house
then munch
on liberty,
equality,
a constitution shredding spree
with every scrap of justice too.
Don’t let Nayslayers
threaten you!

While we were distracted by Trump, Republicans advanced these 9 terrifying bills
“With both houses of Congress solidly under Republican control, there’s little in the way to stop House Speaker Paul Ryan (R-Wisconsin) and Senate Majority Leader Mitch McConnell (R-Kentucky) from sending bills to President Trump’s desk that embody the most dangerous aspects of radical right-wing ideology.” -Resistance Report

Now our country’s adrift and divided
with its POTUS unfit and misguided.
Deconstruction’s the goal;
kill America’s soul!
with the vision that Bannon provided.

With the vision that Bannon provided,
the pretending Decider decided
that the tantrums he tweets
are the media’s treats
until they’re completely blindsided.

“Bannon revealed all, about the reasons behind the president’s curious Cabinet choices. The plan, he said, was ‘deconstruction of the administrative state,’ which he and Trump apparently believe robs people of their independence and hurts economic growth.

So that’s why Trump nominated a labor secretary who wants to replace workers at his fast-food restaurants with robots, an energy secretary who once advocated abolishing the department and an education secretary who doesn’t care much for public schools.”

while his cabinet’s poised like a cannon
behind the unscrupulous Bannon.
They’re loaded and lethal,
exceedingly gleeful
about the destruction they’re plannin’.