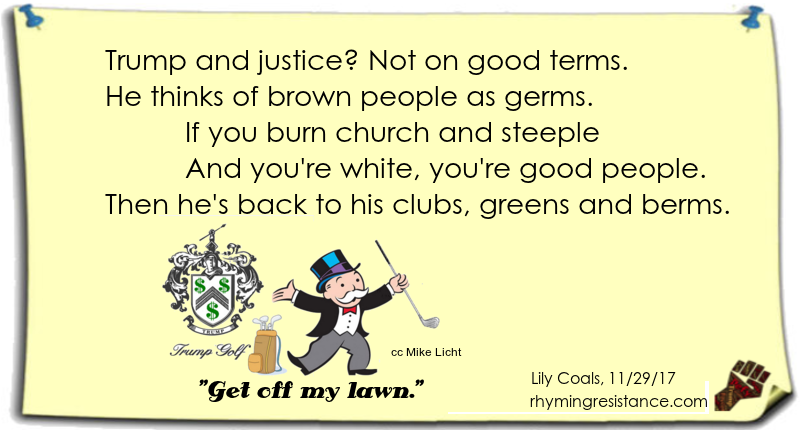 President Trump does not know much about anything, and he doesn’t much care what he does or doesn’t know. He is the Low Information Voter President. That makes his free-range access to Twitter, a cesspool of unverified information and rampant hate, a serious problem—particularly when he can amplify some of the worst information available on the platform to his 44 million followers. We saw this during the campaign, when he would retweet accounts with the handle “White Genocide” and pass on disgusting misinformation about black-on-white crime. But today he seems to have retweeted his way down a new, incredibly dark path.

In three successive early-morning social posts, the President of the United States shared unverified videos from the deputy leader of a British far-right hate group called “Britain First.” The name probably caught Trump’s attention, as he’s been clinging desperately to his “America First” shtick as the tempests of the Russia probe and a thousand daily scandals swirl around him. But Britain First, according to The Independent, has been condemned as an extremist nationalist group. The account tied to the deputy, Jayda Fransen, is partly automated and frequently shares unverified videos that claim to show immigrants and Muslims attacking (white) people in Europe.

That’s what the leader of the free world shared today. To be clear, there is no evidence these videos are real or show what they purport to show. 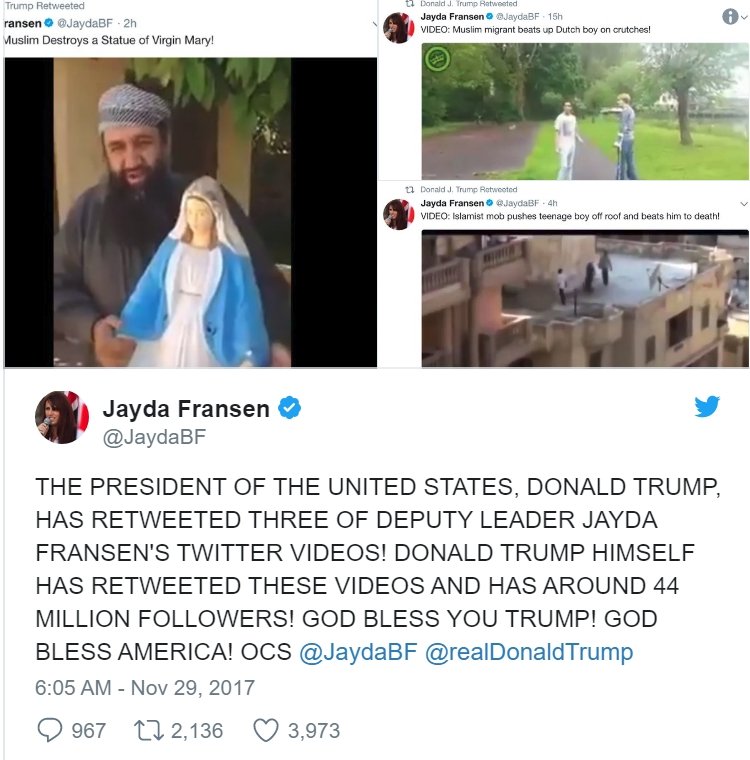 By the way, “OCS,” according to The Independent, means “Onward Christian Soldiers.” Not for the first time, you can read “Christian” here as “White.” This whole episode has jarring similarities to Trump’s treatment of the white supremacist rally in Charlottesville, Virginia. After hundreds of Neo-Nazis, Ku Klux Klan members, and those who think it’s a good idea to rub shoulders with them marched armed through an American city, and after one white supremacist killed an anti-racist protester with his car in what even Attorney General Jeff Sessions called an act of domestic terrorism, the president suggested there were “very fine people on both sides.” That is to say, the President of the United States believed good people march alongside Nazis.

And let’s not even bother with the argument that it’s “just Twitter.” We saw more evidence just this week that his tweets are seen by the world at large as official communications from the president. Our Dear Leader spends his days tweeting complaints about his coverage on CNN, attempting to undermine it and the free press in general as “Fake News,” and some outside our borders are taking notice. The Libyan media cited Trump’s tweet attacking CNN International to question whether a CNN report on modern-day slavery in that country was accurate.

Trump and justice? Not on good terms.
He thinks of brown people as germs.
If you burn church and steeple
And you’re white, you’re good people.
Then he’s back to his clubs, greens and berms. 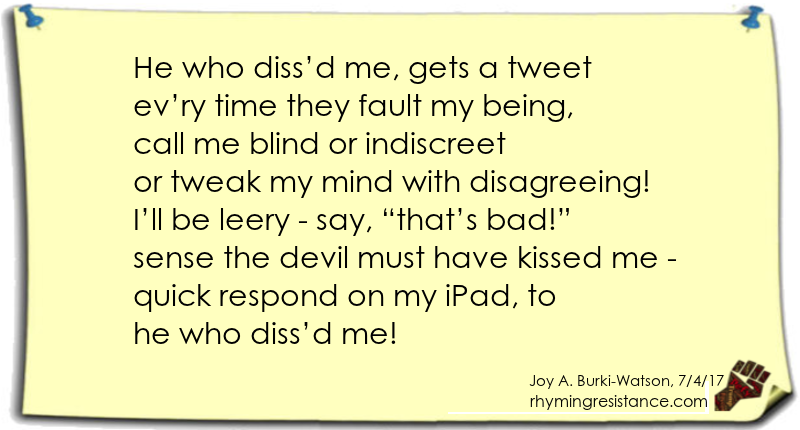 At best, the CNN tweet is an indirect promotion of violence. At worst, it’s direct. Either way, it’s a violation of Twitter’s policy.

The policy also says users “may not incite or engage in the targeted abuse or harassment of others.”

For all the controversy provoked by Trump’s tweets, there’s no question that the POTUS’s use of Twitter as his primary communication medium is good for Twitter. The microblogging service, whose business has been struggling for years, is enjoying its peak cultural relevance, thanks to the Tweeter in Chief.

But Twitter’s harassment problem goes beyond what the president posts and is harmful to the interests of the company (and society) in the long run. And if it’s serious about combatting abuse on its platform, Trump deserves to be held to the same standard as everyone else.

He who diss’d me, gets a tweet
ev’ry time they fault my being,
call me blind or indiscreet
or tweak my mind with disagreeing!
I’ll be leery – say, “that’s bad!”
sense the devil must have kissed me –
quick respond on my iPad, to
he who diss’d me! 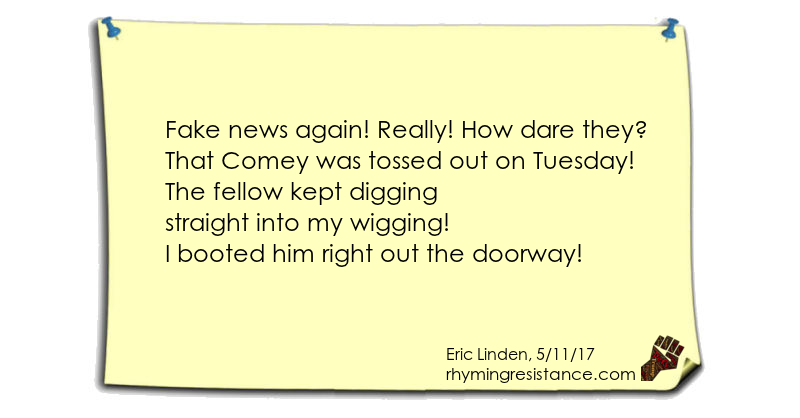 Trump’s tweetstorm railed against the “fake media” and those who expect his surrogates to defend him with “perfect accuracy,” while giving a stern warning to Comey that he “better hope that there are no ‘tapes’ of our conversations before he starts leaking to the press!”

Fake news again! Really! How dare they?
That Comey was tossed out on Tuesday!
The fellow kept digging
straight into my wigging!
I booted him right out the doorway! 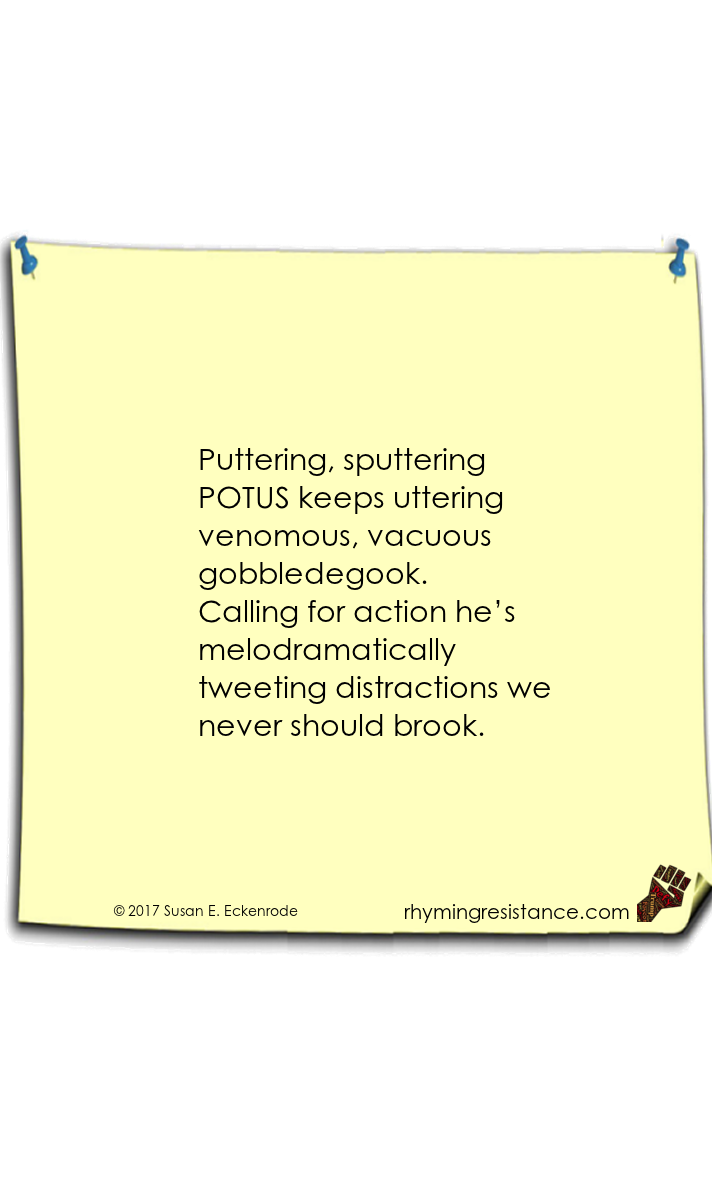 “﻿The British called it ‘Window’; the Luftwaffe dubbed its version ‘Düppel.’ For the Americans, ‘Chaff’ was the code name for the top-secret weapon that, in July 1943, allowed the US Army Air Forces to obliterate Hamburg in broad daylight. For the past two weeks, the Trump administration has been using a Chaff approach to media management—and if we don’t learn how to deal with it, we may suffer the same fate as Hamburg.” 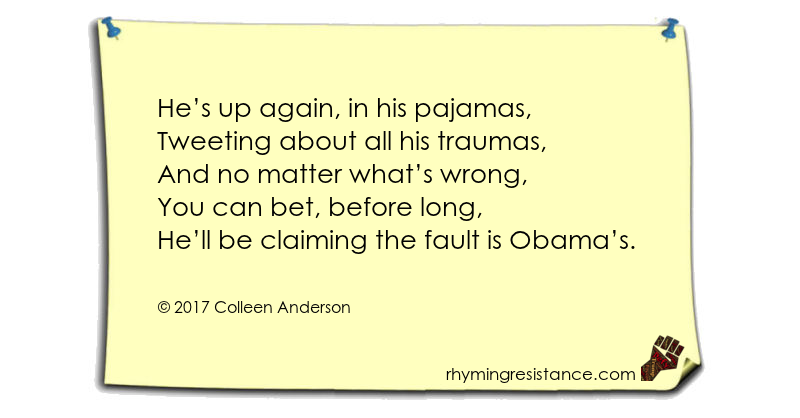 “One of the most destructive human pastimes is playing the blame game. It has been responsible for mass casualties of war, regrettable acts of road rage, and on a broad interpersonal level (social, familial and work-related), a considerable amount of human frustration and unhappiness. The blame game consists of blaming another person for an event or state of affairs thought to be undesirable, and persisting in it instead of proactively making changes that ameliorate the situation.” 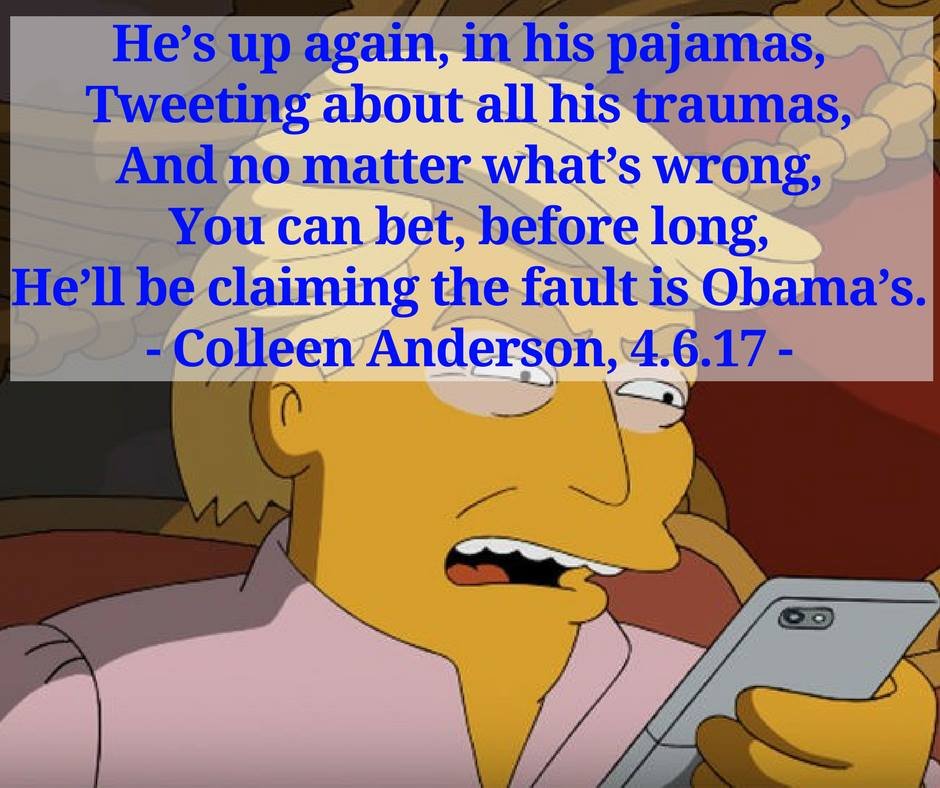 He’s up again, in his pajamas,
Tweeting about all his traumas,
And no matter what’s wrong,
You can bet, before long,
He’ll be claiming the fault is Obama’s.

“America’s business leaders have some advice for President Trump: Put down the Twitter cannon.

Sixty-seven percent of the nation’s chief financial officers surveyed by Duke University believe Trump can improve the business climate if he stops using Twitter, according to a survey of 350 CFOs released on Wednesday.”

It’s known as social media
Mere rhetoric, at best –
Like trumpeter who plays off key
Should give his breath a rest!

As we, defeated, sighing
In this forgotten place —
Hold so little hope in hand
For self-obsession’s face.

His tweets are like snowballs he pelts,
But they’re lies, and so each one soon melts.
It’s a bully-child’s game,
Flinging hatred and blame,
But he’s no good at anything else.

Though he’s no good at anything else,
and his tantrums are raising some welts
on all in his path
that trigger his wrath,
we can counter the blither he belts. 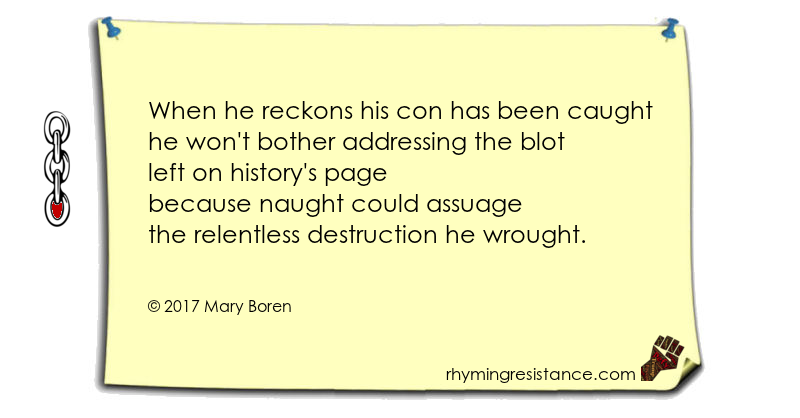 “Donald Trump has sarcastically dismissed women accusing him of sexual misconduct — even as two more came forward with lurid accounts — and denounced ‘an international political and media plot against me’.”

He complains there’s a media plot
undermining the greatness he’s wrought,
so he tweets on a whim
boundless praises of him.
He’s America’s dictator-tot!*

He’s America’s Dictator-tot
Who will never accomplish a lot
Cause he’s mostly all talk
And will jolly well walk
When he reckons his con has been caught.

When he reckons his con has been caught
he won’t bother addressing the blot
left on history’s page
because naught could assuage
the relentless destruction he wrought.

“It wasn’t long ago that pretty much everyone across the political spectrum could agree that it was embarrassing when our elected officials failed to use the English language correctly. Just ask former vice president Dan Quayle how to spell “potato.”

Yet as critics pounced on the latest errors as a sign of carelessness or incompetence, Trump defenders howled back, blasting the criticism as liberal-elite snobbery. It’s come to this: The fault lines of our deeply divided country have crossed into the once-neutral territory of grammar and spelling.”

The Trump administration has a spelling problem.
The Washington Post

There seems to be no way of quelling
His lying and whining and yelling.
Of this I am sure,
But must we endure
His wretched alternative spelling?

His wretched alternative spelling
appears not to hurt what he’s selling
to frenetic fans
impressed with his plans
who still find his tweets so compelling.