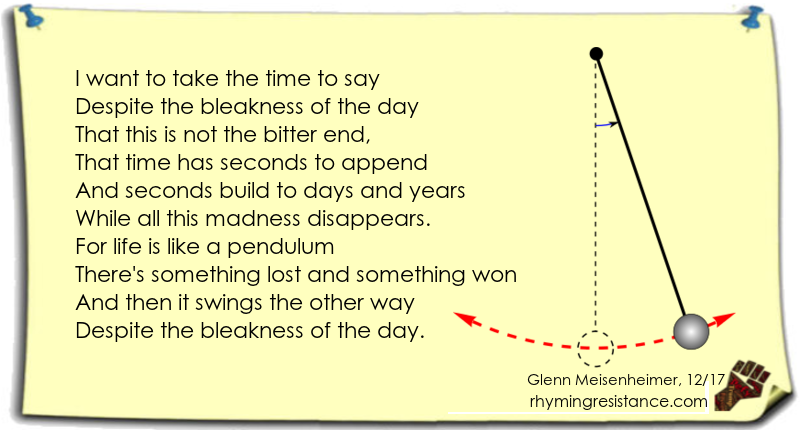 The New York Times opines on The Year in Resistance:

I didn’t fully grasp the scale of the civic revival until I went to Georgia in April to write about the special election to fill the House seat vacated by Tom Price, who had become Trump’s secretary of health and human services. (Like many Trump officials, he has since resigned in disgrace.) Jon Ossoff, the Democrat, lost that race, but the energy of the district’s previously apolitical suburban women was astonishing.

Galvanized by disgust for Trump, they had thrown themselves into local politics, using organizing skills learned in the PTA. I was with some of them the night Ossoff lost, but instead of despairing, they were already planning their next campaigns. In December, they helped the Democrat Jen Jordan win a State Senate seat, breaking the chamber’s Republican supermajority.

Indeed, Democrats have triumphed all over the country, as Trump’s approval rating keeps sinking. The progressive Working Families Party endorsed 1,036 candidates in 2017; almost two-thirds of them won. Due in large part to grass-roots organizing, Democrats won a landslide in Virginia and took Jeff Sessions’s old Senate seat in Alabama.

While Trump has given his followers the liberal tears they crave, that victory contains the seeds of its own reversal. Trump has done more to spur progressive political organizing than Bernie Sanders, George Soros and Saul Alinsky combined. The president once warned that if he fell, he’d take the entire Republican Party down with him. Thanks to the Resistance, he might still have the chance. 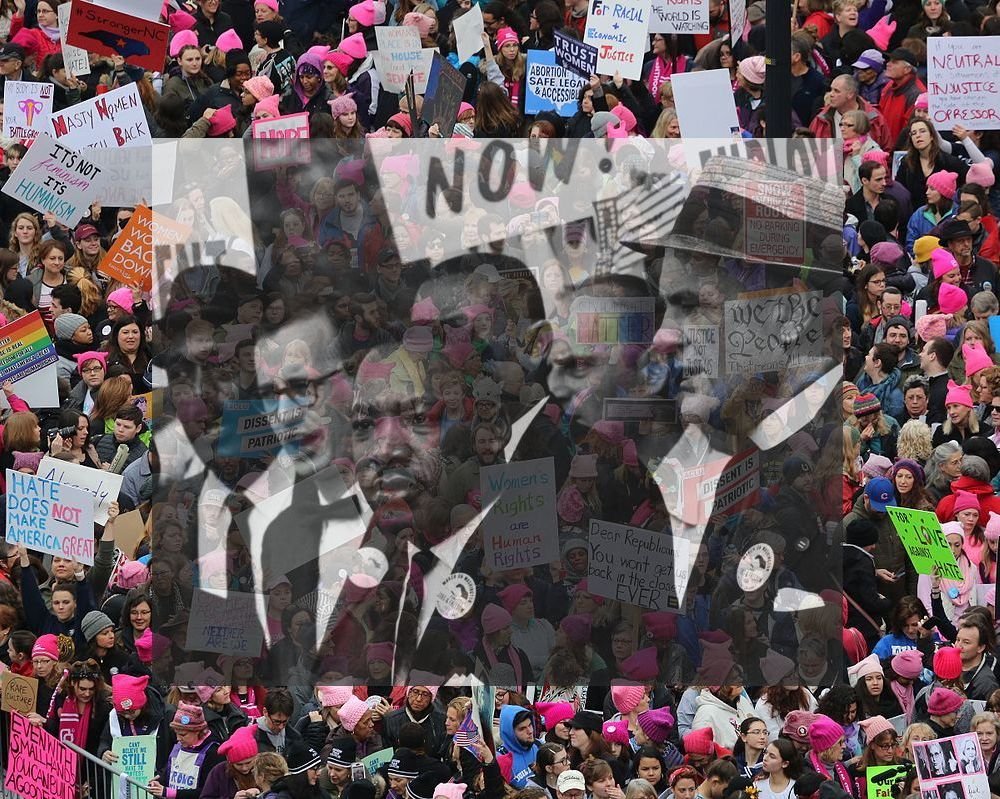 “There comes a time when silence is betrayal.”
The words of Doctor Martin Luther King
hang heavy in the air. Intentions fail
to halt the arc of hatred’s brutal swing.

The centuries of organized oppression
are coming to a climax. You and I
must take a stand for justice. Shy discretion
is not a virtue when the stakes are high.

As hard-won rights are carelessly dismantled
before our eyes, the growing battle zone
erupting in the streets cannot be handled
with slacktivism. None should march alone.

Resisting with a vengeance, beat the drum
and shout in unison, “The time has come!” 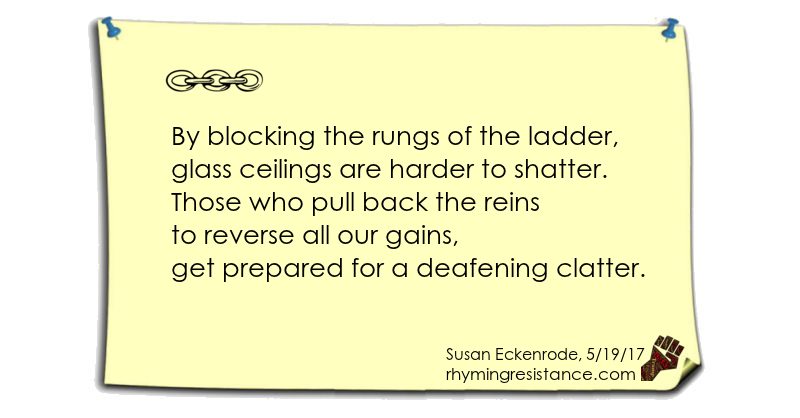 That massive spike in American women wanting to run for office following Election Day? It wasn’t a ripple—it’s a wave, says Stephanie Schriock, president of Emily’s List. The organization that supports pro-choice Democratic women is releasing new numbers Wednesday on just how many women have inquired about entering politics following the 2016 election. The results are rather staggering: Since November 8, over 10,000 women have contacted the organization about potential runs for office—roughly ten times as many as reached out during the entire 2016 election cycle, from January 2015 to last November.

By blocking the rungs of the ladder,
glass ceilings are harder to shatter.
Those who pull back the reins
to reverse all our gains,
get prepared for a deafening clatter. 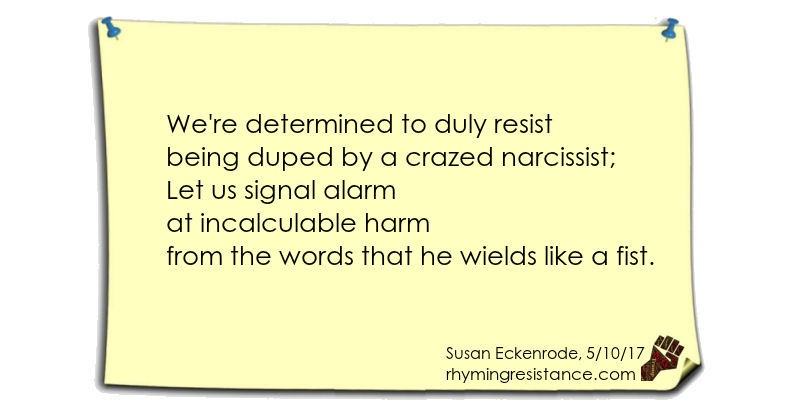 “We just desperately hope you’ll be part of the way forward with the rest of us who see that the monster isn’t under the bed—it isn’t Muslim or gay or Democrat or Republican.

The real monster isn’t even one man with a great capacity for evil and an unprecedented power to wield it.

The real monster is hatred and the silence that feeds it.

And the monster must be stopped.”

We’re determined to duly resist
being duped by a crazed narcissist;
Let us signal alarm
at incalculable harm
from the words that he wields like a fist. 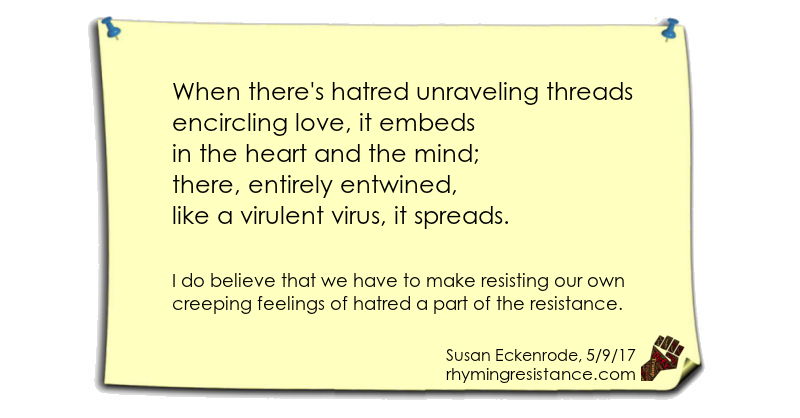 “Hate is contagious. A few seconds after Donald Trump has told me something hateful, somebody else repeats it. He has legitimized what people only dare say in their kitchens and bedrooms.” – Jorge Ramos

When there’s hatred unraveling threads
encircling love, it embeds
in the heart and the mind;
there, entirely entwined,
like a virulent virus, it spreads.

I do believe that we have to make resisting our own creeping feelings of hatred a part of the resistance. 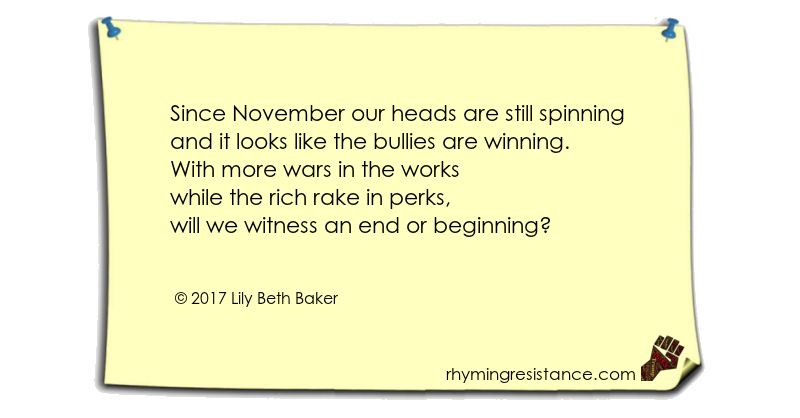 “We wondered if Palm Sunday might have been an act of civil disobedience. We imagined a prophetic Jewish teacher mimicking the pomp and slender of Roman colonizers in a parade dedicated not to himself, but to the outcasts who had gathered to hear a message of grace. We asked if the parade may have been a celebration, not of Jesus’ ego, but of his love of all the people who were colonized, disabled, rejected, humiliated and oppressed. Perhaps he was illustrating that love can build a temple from all the stones other builders have rejected.

“We remembered the words of Rumi: ‘Come, come, whoever you are. Wanderer, worshiper, lover of leaving. It doesn’t matter. Ours is not a caravan of despair. come, even if you have broken your vows a thousand times. Come, yet again , come , come.’

Do the Bullies of the World Ultimately Win?
Jim Rigby

Since November our heads are still spinning
and it looks like the bullies are winning.
With more wars in the works
while the rich rake in perks,
will we witness an end or beginning?

“The Senate has silenced Elizabeth Warren.

And by doing so, majority Republicans just handed the liberal firebrand a megaphone — further elevating President Donald Trump’s fiercest and most prominent critic in the Senate and turning her into a Democratic hero.”

They shushed her, but still she insisted.
They threatened her, but she resisted.
So the minions of hate
Threw her out, locked the gate.
Nevertheless, she persisted.

Yes, nevertheless she persisted
and many more women enlisted
to strengthen the cause
and fight without pause
with raised hands defiantly fisted.