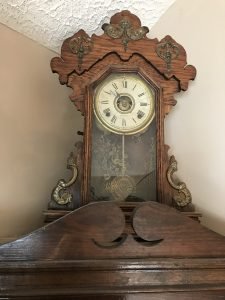 In 1914, papa gave $4.00 (four dollars) for a beautiful and masterfully crafted old second-hand Seth Thomas clock. That dear old clock was one of the constant constants in the times of our childhood, adolescence, and early maturity. And it remained an emotional constant in our minds and hearts. Only those who were born, raised, and matured in the presence of such a classical creation will be able to fully understand the utter impossibility of adequately describing a Seth Thomas clock.

In lieu of a description, I simply tell you that our Seth Thomas was a shelf-clock which was 23 inches high, 14 inches wide and 4 inches deep, which sat on a simple shelf on the wall of the living room of our simple home, which had an ornamentally decorated pendulum and a striker that “bonged” against a coiled spring every hour and every half-hour, which had to be wound with a key every eight days, and whose “ticking” and “tocking” provided a constant comfort by day and by night. I also tell you that from its base to its crest, every line and corner and arc and angle and curvature and indentation and seam and mortise and tenon had poise and grace and symmetry and precision and harmony and balance and beauty.

We (Papa and Mama’s six children) spent our childhood, adolescence, and early maturity in the presence of that captivating and beloved old clock, and, today [1996], innumerable “clock” memories still “tick” and “tinkle” in our emotions and hearts and souls.

We remember that when Mama was in the throes of one of her violent migraine headaches, Papa would put a bobby pin over the coiled spring to reduce the “bonging” reverberation to a soft and gentle “thud”.

We remember how that faithful old clock could also turn fickle and unpredictable. For some mysterious reason, it would periodically choose the midnight hour to go bonkers, and, instead of sounding 12 true “bongs” for the midnight hour, would rapidly strike scores of times.

We remember that one midnight, when Chester was about 13 years old, Old Seth went berserk and furiously struck about 30 or 40 times without missing a beat, Chester, the pernnial sleepyhead, jumped out of bed and shouted: “Hey, everybody, wake up and get ready for the judgment! It ain’t never been this late before!”

In early 1996, Buddy took that old clock out of a 29-year storage, repaired and refinished the woodwork, shined the metal ornamentations, cleaned and oiled the timing mechanism, wound it with the old years-corroded key, gave the pendulum a gentle push, and, 82 years after Papa gave four dollars for it, and after 29 years of storage and stillness and silence, Old Seth instantly settled into a smooth and rhythmical “ticking” and “tocking” and telling of the time as truly and as accurately as it did when it was first created about (perhaps) 120 or 130 years earlier.

Buddy recently went back to the old deteriorating and crumbling house in which we were raised and cut a board from the wall where our clock once rested (a 1″ x 12″ board that had never been touched by paint or varnish or polyurethane, but was still as firm and solid as it was when someone first nailed it into place up toward 100 years ago) and fashioned a genuine antique shelf for a genuine antique clock, and Old Seth now proudly sits upon that antique shelf and faithfully proclaims the true time and appears to be capable of joyfully producing another gazillion of “ticks” and “tocks” and “bongs”.

I now place a gentle benediction upon that faithful old clock by borrowing the profound phrase of an unknown pundit (or perceptive philosopher) who once truly proclaimed: “They don’t make ’em like that any more.”