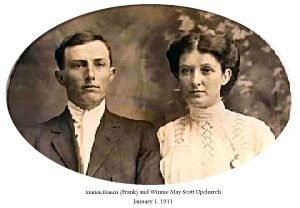 An abundance of fleeting memories of Mama have always floated and danced through my mind and heart, but none of the memories of my first two years of life are ever clear and distinct.

Among my earliest concrete memories are:

Those of her sitting beside Papa on the spring seat of our wagon, wearing a long dress and a bonnet, on our way to the Bois D’Arc Baptist Church. In later years I learned, and still remember, that her bonnet was always removed before she entered into the church building.

Watching her play the piano at the church, always singing as she played, her long black hair (sometimes rolled in a bun at the back of her head, and sometimes flowing free) hanging below the top of the piano bench on which she sat.

How we completely agreed with one of the older and most faithful church ladies when she would repeatedly say: “We have the prettiest piano player that the Bois D’Arc Church has ever had.”

How, on her assigned Sunday, she planned and prepared and cooked and welcomed our part-time pastor for his noon meal and afternoon nap.

The sense of comfort and security of awakening morning after morning as a child and hearing the soft sounds of her voice in the nearby kitchen as she cooked and sang: “Will There Be Any Stars in My Crown?” or “You’re as Welcome as the Flowers in May”, or one of the many other songs she so often sang.

Helping me doctor and put small splints on the broken wing and leg of a crippled bird I found and took to her … and two days later, helping me bury the bird.

Helping me clean and bury my best-ever-loved dog, Fly, on the morning after the night that thieves killed Fly to keep her from barking while they stole oats from our granary.

Standing on a box and drying dishes while she washed them, and the joy of our singing as we washed and dried.

Lagging behind the others as we headed out into the fields in the early mornings, hoping she would tell Papa to leave me to help her throughout the day.

Friends and neighbors gathering at night in different homes to play dominoes and Forty-Two, children on pallets, and Mama constantly checking her sleeping children before and during and after each of the games.

How, with the wagon sheet stretched across the north wall of the kitchen to keep the cold wind out, we sat around the kitchen table as Mama read to us from The Bible, Hurlbut’s Bible Stories, school books, and funny paper.

The look and bulk and sound of her old foot-treadle Damascus sewing machine.

Making Papa’s blue work shirts, and almost all of the shirts that her five sons wore.

Making our boxer-shorts underwear, using the pretty-printed sacks that the cow feed came in.

Making what I always thought were the prettiest and daintiest of all clothes for my little sister, Alice.

Making long dresses for herself, which were always more beautiful than any of those worn by the other women in our church or school or community.

Making bedding and pillows and ticking and casing and sheets and nightshirts.

Quilting indescribably beautiful quilts, with the quilting frame swung low when she worked, and drawn up to the ceiling when she was not working.

Making six cotton sacks each fall, one for Papa and one for each of her five sons.

The pleasant smell of the duck (which we called “duckin”) as she unrolled, measured, marked, cut, and sewed it.

Bringing fresh water and snacks to the fields in which we were working.

Signalling “dinner time” at the noon hour by hanging a white cloth on the clothesline or in a tree.

Drawing washtubs of water to be warmed by the sun for our work nights and Saturday night baths.

Cleaning the house, and sprinkling the rough-pine floors with water before sweeping them.

Shooing the flies from the house with a homemade towel in each hand, and patching the holes in the screen doors to block their return.

Eagerly watching for the first young plants to appear in the garden.

Hoeing and weeding and petting and propping and protecting the young plants as they grew.

Anticipating the gathering and preparing and cooking and serving of the first new vegetables from the garden.

And, almost with perpetual motion, straining milk and gathering eggs and rendering lard and cooking crackling bread and cornbread and sausage and bacon and pork chops and backbone and ribs and ham and eggs and biscuits and gravy and dumplings and vinegar pie; singing as she cooked and as she washed her hands and as she washed the dishes.

Making lye soap in the washpot after the hog-killing season was over.

Making water cornbread when no milk and eggs were available, and gauging the proper cooking time by watching the small ridges that formed between her fingers when patted the pones into shape for the baking pan as they turned brown and crisp in the oven.

Constantly doctoring our skinned knees and stubbed toes and mashed fingers and cuts and bruises and risings and sunburned skin and seven-year-itch and perennial attacks of childhood afflictions: the best of all her medicines her comforting assurance, “It will be better tomorrow.

Seeing her ravaged by one of her migraine headaches as she sat in a cane-bottomed chair with her head resting on the back of another chair, and the children instinctively still and quiet.

The joy of combing her long black hair, which reached to the floor when she sat in a cane-bottomed chair.

The shock and anguish of one day coming home from school and discovering that Papa, hoping to ease her migraine headaches, had given her a bowl-type haircut by whacking it off in a serrated line just below her ears.

Hearing her voice in the middle of many nights, asking Papa: “Are the boys all in?”

I have no memory of Mama having ever spoken an angry or harsh or condemning of threatening word to me; no memory of ever hearing her yell or shout or scream; no memory of her ever hitting or slapping or whipping me. There were times when, with her voice and eyes and tears, she expressed disagreement and disappointment and sadness in connection with some of my choices and actions, but never anger and shouting and threats of physical violence.

I, of course, do not know or remember the first words that Mama spoke to me, but I do know and vividly remember the last words I heard her say. In the early summer of 1973, she was seriously ill with the physical ravages which resulted in her death on July 7, 1973. In the latter part of June, I came down to be near her for several days during those sad and anxious hours. At the close of my visit, I stood by her bedside to tell her good-bye before going back to my home. In the final moments, she held my hand and whispered, “I love you”. Then, as if touched by some unearthly aura, she closed her eyes, relaxed, lay still and quiet for what seemed to be an almost-breathless moment, and softly said: “I see the river. The river is beautiful. I want to go into the river.”

With her dear words softly sounding in my soul, as they have so often resounded across the almost 23 years since that day, I drove back to my home. A few days later, Chester called and told me that our Mama had “gone into the beautiful river”.