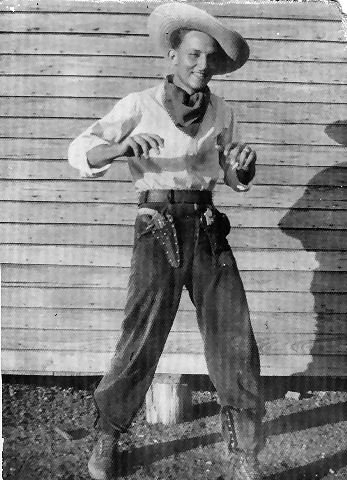 (Tales from a Texas Preacher excerpt.)

Shortly after Buddy had recuperated from his coal-and-horseshoe wounds, I became apprehensive about his personal security. Bonnie and Clyde, and Raymond Hamilton, were terrorizing our country in every direction. This forced me to the conclusion that I must devise some method or mark by which I could positively identify my little brother, even if they kidnapped and held him incommunicado for extended years.

And that explains why I stuck that hot branding iron to his leg.

But, wait, I have gotten ahead of my story. Let me back up and start all over. With a heavy piece of wire, I fashioned a branding iron with an S on one end and a crimped handle on the other, and called it my Crooked Lazy S. My conscience bothered me a little when it kept on whispering that what I was planning would be painful to Buddy, but I squelched my conscience by repeatedly assuring myself that what I was about to do was the best thing that could be done for the long-term welfare of my little brother.

Thus it was that with cold deliberation I built a fire on the ground, poked my branding iron into it, coiled my rope, lassoed my little brother, bulldogged him to the ground, and stuck my Crooked Lazy S to one of his legs. I tried to comfort him by repeatedly telling him that it was hurting me far worse than it was him. Within about five minutes, his leg had sorta’ stopped sizzling and smoking, and he was not screaming quite as fiercely as he had been a few minutes earlier.

Many years later, Buddy wrote the following poem to express his version of what happened, and how it happened on that long-ago day:

One day when we were left alone,
Hal thought t’would be quite grand
To burn upon my little leg
Some famous cattle brand.

He took a piece of heavy wire
And, much to my distress,
He shaped a brand and called the thing
A Crooked Lazy S.

He built a fire to heat the brand
And got his lasso down,
Then, like a veteran of the trail,
He tied me on the ground.

I cried and bawled and bleated,
I besought him with a beg:
“Oh, please don’t put that red hot iron
On my poor little leg.”
I fought and cried, I kicked and yelled,
But all my pleas he spurned.
He stuck that brander to my leg
And watched me as I burned.

Of all the things I’ve ever thought,
Just one will do to say:
“He did a fairly permanent job;
I bear that brand today.”

You will notice that there are some variations in our reports of that branding episode. But in spite of the variations, I have always been, and still am, absolutely positive that the only reason Buddy was not kidnapped was because Bonnie and Clyde and Raymond somehow learned that I had put my Crooked Lazy S brand on him, and they were afraid to fool around with my little brother.